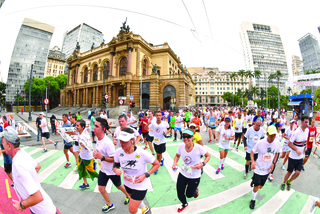 More than 30,000 runners from dozens of nations all around the world flock to São Paulo on the last day of the year to participate in this internationally famous race.

The ‘São Silvestre’ brings the sporting year to a close in Brazil. Colouring the streets of one of the world’s largest cities it passes through the commercial and historical centres. The 94th edition will be celebrated with another great sporting party.

The strongly competitive side of the event is complemented by a fearsome course. The long, technically-testing ascent of Avenida Brigadeiro Luis Antonio has broken many top athletes in their time.

But the race is welcoming of those who want to close the year doing what they like and having fun with an unforgettable party. Superheroes, characters from the cinema, politics and all sorts of others parade their joy through the streets, making the São Silvestre even more charming and attractive. It extends an open invitation to run with friends and family, mixing sport, leisure and socialising.

From whichever group you come from you can be sure of first-rate support along the 15km route with hydration, medical stations, ICU ambulances, isotonic drinks and comprehensive safety precautions in place. Before the race Expo São Silvestre has booths offering products and services, lectures and a food area for athletes and visitors.

There are also all the attractions of the city of São Paulo, with its busy cultural and nocturnal life, to enjoy before or after the race. There are museums, parks, theatres, cinemas, restaurants and much more.

After the race, in the same place it starts and finishes, the City holds its New Year’s Eve party with numerous shows and attractions. Just one more reason to enjoy a few days celebrating the New Year and your performance in the famous São Silvestre International.