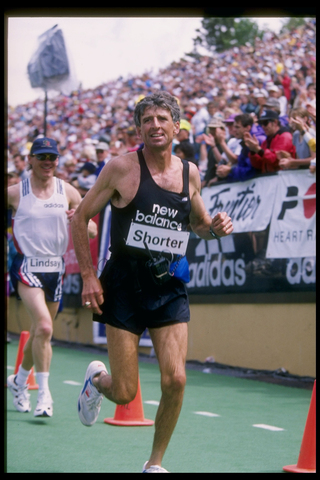 26 May 1997: Frank Shorter runs at the 19th Bolder Boulder in Boulder, Colorado on the 25th anniversary of his winning of the 1972 Gold Medal Munich Olympics Marathon.
Photo: Brian Bahr
© This content is subject to copyright.

Frank Shorter’s victory in the 1972 Olympic Games Marathon brought new interest to the event in the USA which was then sustained by the performances of several top-class American runners following in his wake.

His Olympic success, along with the achievements of other American runners such as Bill Rodgers, Kenny Moore and Don Kardong, later followed by Alberto Salazar and Dick Beardsley, is credited with igniting the running boom in the United States during the 1970s.

He finished in silver medal position at the 1976 Olympics in Montreal behind Waldemar Cierpinski of East Germany. After the fall of the Berlin Wall in 1989 it became clear that East German athletes had been put through officially-sanctioned doping programmes and in the late 1990s Cierpinski was implicated by East German track and field research files uncovered by the German investigative journalist Werner Franke. Both Shorter and Moore (who finished fourth in the race) have argued that Cierpinski’s Olympic performances should be officially reviewed.

Frank Shorter was born in Munich in 1947 – the location of his Olympic victory 25 years later – where his father was serving as a US Army doctor. He grew up in Middletown, New York in what he later revealed was a violently abusive childhood.

A street in Middletown that was part of the course of the Orange Classic 10km – the inaugural edition of which Shorter won in 1981 – was named in his honour as Frank Shorter Way. He attended high school in Massachusetts and went on to Yale University from where he gained his BA in 1969. He subsequently attended the University of Florida and – after fitting in his Olympic Marathon win – he graduated with a Law Degree in 1974.

In his final year at Yale Shorter won the National Collegiate six-mile title and followed up the next year with US national titles at both three and six miles. He went on to win the National six-mile (later 10,000m) title in 1971, 1974, 1975 and 1977.

His attendance at the University of Florida had a lot to do with the favourable training environment and availability of training partners. Primarily this was Jack Bacheler, at the time regarded as America’s best distance runner. Bacheler, Shorter and the later running ‘guru’ Jeff Galloway all made it to the 1972 Olympics and became the focus
of distance running on the East Coast.

Shorter is the only American athlete to win two medals in the Olympic marathon. His gold medal run in Munich came only days after he had finished fifth in the 10,000m final in which he broke the American record that he had set in his qualifying heat.

Before Shorter entered the stadium he had been preceded by a student prankster, Norbert Sudhaus, moments ahead of him. While this stunt confused the crowd Shorter was not fazed by the relative silence that greeted him. Shorter knew that none of his rivals could be ahead of him.

Following his win he received the James E. Sullivan Award as the top amateur athlete in the United States but it was this same win which helped to pave the way towards the end of amateurism in athletics and the start of the era of open competition.

Shorter withdrew from the 10000m in the Montreal Olympics in order to concentrate on the Marathon but after leading from 25km was caught and passed by the little-known Cierpinski. Even at the time widespread doping abuse by East German teams was suspected. Kornelia Ender’s eleven victories in the swimming events perhaps gave most obvious cause for concern. Cierpinski was the first East German runner to compete successfully at an international level.

Shorter steadfastly maintained his stance and interest in anti-doping through the years. He helped to establish the US Anti-Doping Agency and was its chairman from 2000–2003.

In 1979 Shorter co-founded the highly successful Bolder Boulder 10km race in Boulder Colorado where he had long resided. The race takes place on Memorial Day and culminates with a tribute to U.S. Armed Forces at Folsom Field at the University of Colorado. A life-size bronze statue of Shorter stands outside the stadium.

Shorter was inducted into the United States Olympic Hall of Fame in 1984 and the USA National Track and Field Hall of Fame in 1989. He received the AIMS Lifetime Achievement Award in 2016 for his long-term contribution to the sport of distance running.