The allure of altitude 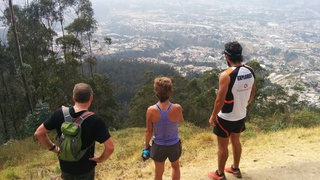 It’s 05.00 on 6 January in Addis Abeba, Christmas Day for Ethiopian Christians and Orthodox Christians around the world.

Later that day, as an invited guest for family celebrations, I witness this gifted runner consume almost half a kilo of raw red meat dipped in a tasty sauce of chili peppers and mustard followed by a traditional spicy chicken stew. This is hardly what she eats on a daily basis: grounded fava beans with avocado and yogurt is more representative of the diet of most runners – like the Bekeles, Dibabas and the great Haile Gebreselassie.

This high-octane fuel, packed with iron, coupled with well-hydrated bodies tempered at high altitude, produces enriched hemoglobin with a resultant boost in the oxygen-carrying capacity of the blood. Runners and exercise scientists debate the benefits of training above 3000m or the possible inherent genetic advantage accruing to those born and raised in such a setting.

The Ngong Hills, only 40km from Nairobi, rise 1000m from the Great Rift Valley to a height of 2400m and provides a training ground for elite and amateur runners. Dirt trails are undulating and unforgiving as Paul Tergat used to test his kick on these hills; it’s the best place to train so close to the capital. This area, coupled with a nutrient-rich cuisine and a uniquely Kenyan collective team spirit, has helped Kenya to sweep the podiums of long-distance races throughout the world. to symbolize the sacrifice and power of its athletes claiming 1-2-3 on. Whether in Iten, Ngong or just on some dusty road, I believe a convergence of unbelievable discipline, faith and diet cultivates endurance levels that will continue to empower Kenyan runners for generations to come.

In mid-May this year Margaret Toroitoch, a native of Eldoret in Kenya, was up early in Quito’s Parque Metropolitano Guanguiltagua. Situated within the city limits of the Ecuadorean capital, but at an altitude ranging from 3000–3200m with breathtaking views of volcanoes and mountain peaks rising above the clouds, this is the place to run for Quitenos and many expatriates. Margaret is making her fourth attempt to win a race that has a median altitude of 2850 meters. Although not a marathon, the unpredictable weather makes this 58th annual edition of the Quito Ultimas Noticias 15km very challenging for all 18,000 entrants.

Spending almost two months prior to the race training daily in this park brought victory for Margaret. And for Kenya, as this race attracted runners from Kenya, Ethiopia, Peru and Colombia in an unofficial high-altitude nations’ competition for bragging rights. Peruvian Christian Pacheco would edge out the Kenyans to claim the top place in the men’s race.

Scholarly articles and perhaps doctorates in physiology have been earned testing theories as to why so many victories in long-distance races come from athletes born and bred at high altitude. Having met with so many of the athletes from these nations I’m always quick to reply with the “Radcliffe factor.” For all the theories, arguments and victories, how is it that a runner from the English lowlands set a since-unrivalled world record that has withstood the te for 15 years? My high-altitude born and bred friends would retort that Radcliffe is the Halley’s Comet of women’s long-distance runners while the vast majority come from East Africa. But then there’s Shalane Flanagan (set to defend her 2017 NYC Marathon win) to which the retort is that her roots are in Boulder, Colorado – not that much lower in altitude than Nairobi in a state with more than 50 peaks above 4000m. The altitude argument is like a milking cow that just keeps providing sustenance…

I’m inclined to offer a combination of three heavily contributory factors: faith, family and perseverance. This last is honed in an environment where hardship has emboldened East African athletes to perform at such a sustained, high level of performance within a cultural context – and where victory is the standard expectation.

I believe that equally vibrant running cultures are being forged in Ecuador, Peru and Colombia. Despite the overwhelming dominance of Futbol if these nations’ respective Ministries of Sport/Youth can promote running and private sector sponsorship of races such as Quito’s 15km participation will be drawn from a much broader sector of society.

Derartu Tulu’s Olympic golds are not displayed in her trophy cabinet – she donated them to two monasteries. Faith is paramount to all the Kenyans I’ve ever encountered and in Quito the ‘Ruta de las Iglesias’ 10km race starts in the middle of the night to run around the city’s churches and convents. The broad definition of family and how it helps to coalesce the community in an African context provides a source of empowerment for all these runners.

Ecuador, Ethiopia and Kenya. Spend two or three weeks testing your own theories of the benefits high altitude training on your next vacation. See the Galapagos Islands and the Amazon… but also see base camp of Chimborazo. Train in Entoto while visiting a country that declared Christianity a state religion around 330 AD and is rich in history, culture, cuisine, language and geology. In Kenya run with humility and visit the National Parks and Reserve. Then return to your lower altitude reserve and measure the difference.