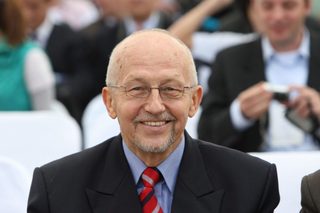 Horst Milde will have a special honour on Sunday (12 August) at 1pm.

The founder of the Berlin Marathon will welcome the best Europeans at the men’s European Championships marathon award ceremony and present them with their medals in Berlin.

“For me this is a great honour and at the same time a recognition for my decades of work in running and athletics in Berlin and Germany. I really could not have anticipated that,” Horst Milde said in an initial reaction.

The boulevard at the Kaiser-Wilhelm-Gedächtnis-Kirche on Kurfürstendamm/Tauentzienstraße hosted for decades the finish of the famous Berlin Marathon, which wrote its own sports history and became a dream destination for runners from all over the world.

In 1998, the Brazilian Ronaldo Da Costa was honoured by Horst Milde for his victory at the 25th Berlin Marathon in the world record time of 2:06:05 hours, as was Tegla Loroupe (KEN) for her world record and other “top-class” runners on the international scene. Milde’s diverse activities have been a major catalyst in getting Berliners running.

While Horst Milde will honour the men, Uta Pippig, the three-time Berlin Marathon winner, will do the same for the ceremony of the best European women.

According to German Road Races Association (GRR), the choice of Horst Milde and Uta Pippig as medal presenters could not have been better.

“Both Horst Milde and Uta Pippig have contributed in an exceptional manner to running both in Berlin and Germany. We welcome this tremendous selection by the organising committee in conjunction with European Athletics and the German Athletics Association,” said the board of German Road Races in a statement.