Marathon history was revisited by events in London on 22 April 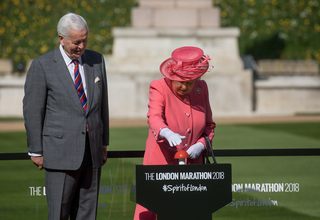 On 24 July 1908 Princess Mary, the wife of the future HM King George V of Great Britain, gave the signal for runners to start the London Olympic Marathon from the grounds of Windsor Castle.

They entered the White City Stadium in west London after 26 miles and had another 385 yards to complete before reaching the finish line. This distance was to become what subsequently defined the Marathon, a race which had previously been of variable length.

The Marathon was still in its infancy as an athletic event; it had only been ‘invented’ for the inaugural modern Olympic Games in Athens 12 years earlier. From the outset it attracted patronage from royalty. King Constantine of Greece awaited the arrival of runners at the finish in the Panathenaikos Stadium in Athens. As the leader – a local Athenian – entered the stadium Crown Prince Constantine and Prince George jumped from their seats to escort Spiridon Louis to victory over the last 100 metres on the track.

An escort on the last lap was something that Dorando Pietri also received in the final stages of the 1908 Olympic race. The track was 536.44m (x 3 = 1609.34m, or 1 mile). As Pietri attempted to take the shorter, counter-clockwise route to the finish (‘trackwise’ as we know it today but races were run either way around in those days) he was re-directed sharply to his left, stumbled and fell. Badly dehydrated, he had struggled to cover the last mile in 13 minutes (over 8 mins/km). He collapsed several times on the track but was helped up and partly escorted by race officials before breaking into a last-gasp sprint to the line.

All this was closely observed by Princess Mary’s mother-in-law and HM King Edward VII’s wife, Queen Alexandra, from the royal box adjacent to the finish. When Pietri was later inevitably disqualified for receiving assistance she took the trouble to commission a special trophy for him, the ‘Pietri’ Trophy. At the awards ceremony the winner, USA’s Johnny Hayes, was completely upstaged. The young Irving Berlin composed a song in Pietri’s honour, adding to his lustre.

Such was the drama that had unfolded during the race that the distance of 26 miles 385 yards, later converted to 42195m, became fixed as the one constant in a series of highly publicised re-matches of the main players in the race that took place in various locations in the USA, including indoor venues, over the next few years. It became the confirmed ‘classic distance’ of a marathon which up until then had been variable.

109 years and 253 days after that defining race history echoed down the ages: Princess Mary’s grand-daughter, HM Queen Elizabeth II, signalled the start of the 2018 London Marathon from that same Windsor Castle lawn. The start line was elsewhere: about a marathon’s length due east on Blackheath, on the other side of the Greenwich (zero) meridian, as images appeared on giant screens for the 41,000 runners assembled. The distance was the same. The finish was at Buckingham Palace, the Queen’s official residence in London, and runners were awaited there by her grandson Prince Harry.

At 10.00 on 22 April the Queen pressed a button which the British press described as clunky ‘old technology’. The technology was more likely just choreography scripted by the atomic clock. Whatever the details, royalty knows how to put on a show – and marathons seem to be part of the programme.