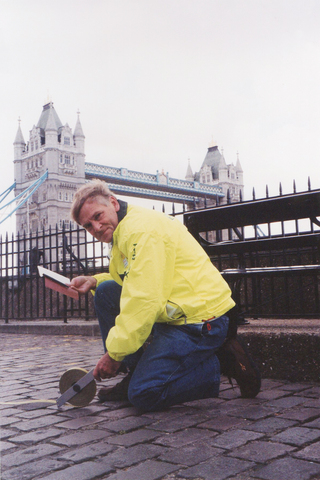 A mechanical engineer by training, Pete Riegel was also an enthusiastic distance runner who applied his expertise and logical thinking to the sport he loved.

In 1977 he had come up with a formula for comparing relative performances at different distances. Its simplicity and predictive accuracy resulted in it being widely adopted by websites such as Runner’s World.

The recognised method of measuring road running courses was developed in the 1960s by John Jewell in Great Britain and Ted Corbett in the United States but was not widely applied until much later. The measurement of the Los Angeles Olympic Marathon in 1984 provided a practical opportunity for some of the leading measurers in North America to come together and share their ideas and experience.

From this a more robust, US-wide administrative system was built which owed much to Riegel’s insight. New York measurer Jim Gerweck says “an indication of what a visionary he was was in establishing the Road Running Technical Council as a Council rather than a Committee when The Athletics Congress/USA Track & Field was being formed [so] insulating us from the ‘politics’ that plagues so much of that body. [Also] the logic of making certifiers specific to each state rather than to USATF Associations.”

As founder and editor of Measurement News Riegel created a forum for ideas and discussion which held the measurement community together both in the US and worldwide. He also travelled widely both to measure and to teach the measurement method. Along with others he validated the courses on which world marathon records were set (London 1985, Rotterdam 1985 and 1988).

In 1995 he retired from his career in research at the Battelle Memorial Institute’s Columbus Laboratory. In 1996 he headed the team which measured the Atlanta Olympic Marathon course and included measurers from Australia, France, UK and South Africa. Since 1985 he had been travelling every year to validate the London Marathon course (on which Khalid Kannouchi and Paula Radcliffe set world records) and in doing so developed a strong friendship with London Marathon co-founder John Disley.

Riegel and Disley, along with Ted Paulin of Australia and Jean-Francois Delasalle from France, became the original continental “Area Administrators” of the worldwide certification system set up by AIMS and IAAF in the 1990s. He continued to validate the London Marathon course until 2010.

Two years before relinquishing this role he had stepped in to rescue the ‘Jones Counter’ – the essential tool used to measure running courses – when the person assembling them could no longer obtain the parts. The inventor of the counter, Alan Jones, said: “Pete decided that we should no longer depend on existing parts which can go obsolete so he teamed up with his son Tom. They invented a new design and created the tooling to allow them to be made. For the last ten years they have provided a steady flow of counters to measurers all over the world.”

Pete Riegel is survived by his wife of 59 years, Joan, and sons Stuart and Tom.