A fast course and grand sightseeing tour around the Danish capital 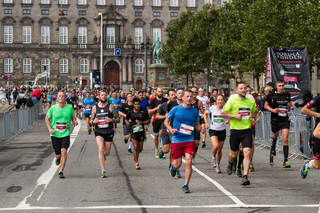 With more than 22,000 runners Copenhagen Half Marathon is by far the biggest running event in Denmark. Built on the success of the World Half Marathon Championships held in Copenhagen in 2014 the CPH Half has staged some of the fastest half marathon times in the world since its inaugural edition in 2015.

Three runners under 59 minutes and a world lead time of 58:40 clocked by Abraham Cheroben – only 18 seconds short of a new world record – made the 2017 Copenhagen Half Marathon one of the road running highlights of the year. This year the world record will again be targeted in both the men’s and women’s races with up to 25,000 recreational runners following the leaders.

The fast course offers a good chance to run a new personal best but also takes participants through the best parts of Copenhagen and makes for a grand sightseeing tour around the Danish capital. Starting at the fashionable and green Østerbro runners proceed to the multi-cultural Nørrebro where the legendary atmosphere on Dr. Louises Bro is sure to give runners chills. After nearly 4km on Nørrebro runners reach the majestic Frederiksberg to take in the Avenue Frederiksberg Allé draped in Danish flags and chock full of spectators. Next is the hip and creative Vesterbro packed with entertainment, music, and good vibes.

Leaving Vesterbro runners follow the waterfront towards the inner city and pass by tourist attractions and historical monuments such as the Copenhagen Stock Exchange, The Theatre Royal and Christiansborg. The final kilometres take runners back to Østerbro where a unique kilometre-long finishing stretch awaits.

CPH Half is not only renowned for its fast and scenic course but also for a sublime atmosphere throughout the entire city. If you are bringing supporters the route offers ample opportunity for cheering while at the same time enjoying everything that Copenhagen has to offer – from amazing food experiences to a cooling dip in the harbour.

On the day before the race there is a children’s event starting and finishing just a few metres from where the CPH Half starts. The children can choose to run one or two kilometres.

If you’re looking for a fast, beautiful and unique half marathon which also offers something for the entire family this major half marathon in the Danish capital is one for the books.