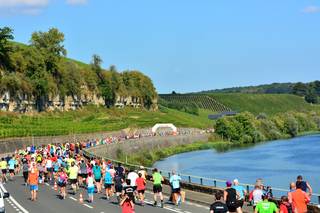 The Duchy of Luxembourg’s oldest race is run along the Moselle River. The out-and-back course, starting and finishing in Remich, is flat and offers optimum conditions to run a fast time. The 57th edition will host over 1500 runners and bring together some of the top 100 runners in the world as well as those who take part just for fun.

Remich is one of the most important tourist centres near the German-Luxembourg border. It was known as ‘Remacum’ in ancient times and was conquered and destroyed several times. A fortress was constructed of which the remnants are still visible.

The town is located within a picturesque panorama of vineyards and green spaces. A 3km-long promenade, bordered with birch and cherry trees, runs along the Moselle. There is a wide variety of activities for all ages, including river cruises and wine tastings. Remich has charming old alleyways and historically important remains to explore.

The St Nicolas Gate was built in honour of the patron saint of fishermen which were previously so important to the town. St Cunibert Street is home to this religious man’s birthplace who was Archbishop of Cologne in the seventh century.

The pedestrianised centre is dotted with small squares and fountains. The tower of the parish church offers a panoramic view of the village as well as the Park Brill.

Tourist cruisers ply on the Moselle River and bikes are available for rent. There are biking and running trails along the river and through the surrounding forests. Nearby are a children’s playground, a large mini-golf course and a heated swimming pool of Olympic proportions. The renowned thermal baths in Mondorf-les-Bains are within 20km of Remich.

Remich offers a perfect starting point for trips throughout the region but itself lies at the heart of Luxembourg’s wine culture. There are many and varied wineries, one underground, in the neighbouring villages which offer tastings of the country’s internationally recognised wines.