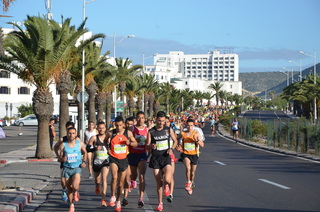 About 8000 people celebrated Earth day by participating in the Agadir Green Marathon making it one of the city’s most successful events this year.

The marathon is a great way for a visitor to discover Agadir – by offering a sporting challenge framed by the city itself. The event is also noteworthy for its eco-friendly stance. The Agadir Green Marathon is mindful of environmental issues and highlights Morocco’s desire to commit to greater respect for the environment.

The weather was perfect and participants were cheering, dancing and taking pictures to capture those beautiful moments. There was nothing but happiness and joy throughout the entire marathon course.

Dubbed the first green Marathon in Morocco, this year’s edition of the Agadir Marathon was held under the banner “Let’s Run for the Environment.” Race director Rachid Ben Meziane said the slogan is inspired by the city’s commitment to preserve the environment and to sustain green spaces. The Marathon brought together internationally renowned athletes alongside thousands of running enthusiasts. The programme includes the Marathon, a half Marathon and a 7km ‘Mini-Marathon’.

Marathon day was designated as car-free: “This initiative aims to raise awareness of the importance of reducing the emission of polluting gases” said the Marathon’s co-ordinator, Karim Dahbi.

The sixth Green Marathon remained faithful to the environment through a series of activities on the sidelines of the event. These activities focused on the importance of linking sports to the preservation of the environment. Organisers emphasised afforestation and partnering with associations that work to preserve the environment and to sustain green spaces.

The event’s success is due partly to the participation of professional runners which enhances its media profile. It also benefits from good organisation and management of the course, including plentiful water stations along the route. The marathon received excellent media coverage.

To better support its cause the marathon has established ten commitments in favour of the city and the betterment of the environment.

The day after the race, green spaces in the city will be planted with the same number of trees as there were participants.

In coordination with the local authorities Marathon day will be decreed as a day without cars.

Marathon entries are linked to the individual signature of a charter of respect for the environment.

Means of transport employed by the Marathon will be exclusively electric vehicles and rechargeable hybrids.

Along the entire race route waste left will be recovered and sent for recycling.

Instead of using bottled water tapped water tanks will be used to re-fill recyclable bottles.

Communication with runners via e-Newsletters/mail and via the website and social networks. Any documents printed will be on recycled paper.

All partners of Agadir Green Marathon commit to the same green approach.

After the race an award is made to the city’s best ecological agency or actor.

Agadir Green Marathon sets up partnerships with institutions and actors committed to the environment in order to raise awareness among the general public.

The city of Agadir is well endowed with beautiful beaches facing on to the Atlantic Ocean. Here, the sun meets the sand and caresses every bit of it. A three-hour flight away from Paris, similar to many other European cities, Agadir is a charming seaside city that attracts tourists from all over the world.

Agadir’s beaches offer an escape where you can forget about daily routine. It is also a place where tourism runs in parallel with well-being: Sport and fitness are the focus of the many seaside thalassotherapy centres. A vacation here sends you home refreshed and full of energy.