Historic, scenic and super-fast, Lake Maggiore has it all 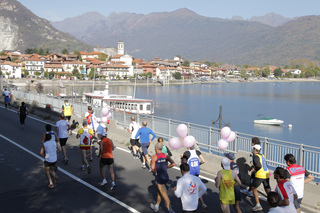 Along the shoreline of Lago Maggiore must be one of the most scenic courses imaginable. But it is also, as this year’s 11th edition of the race proved, one of the fastest half marathons around.

Winner Daniel Kipchumba ran the fastest time in Italy this year and fourth fastest ever on Italian soil. It was also the fifth fastest time of 2018 anywhere in the world. Ideal weather conditions: no wind, a cloudy sky and 12–14C° temperatures, allowed the leading Kenyan trio to sustain 2:48/km pace with a 10km split time of 27:47.

Over 1500 participants from more than 30 countries crossed the finish line in Stresa after running along the lakeside with spectacular views of the Borromeo Gulf already covered in flowers and at its best dressed during the full bloom of spring.

After the first edition in 2008 the race quickly became the preferred destination for many foreign runners who also come to compete in the SPORTWAY Lake Maggiore Marathon later in the year (this year on 4 November). When the half marathon date moved to April it was able to showcase Lake Maggiore in full season with major attractions open to public such as the Borromeo Islands, the Villa Taranto Botanical Gardens and the many beautiful small towns along the Gulf like Feriolo and Baveno.

The peculiarities of the race are many: runners reach the start by means of a ferry boat which crosses the Borromeo Gulf and passes close by the Borromeo Islands. It is an inspirational sight just before starting the race in Verbiana. All along the route participants can count on the special help while they are running provided by a continuous view of the Lake which pulls them on towards the finish.

The finish line in Stresa lies in front of the “Liberty Style” hotels and buildings where many famous people, from the 18th century on, stayed during their “Grand Tour” of Europe. Stendhal, Charles Dickens, Lord Byron and Ernest Hemingway all visited.

Located on the western side of Lake Maggiore, directly opposite Stresa, the three Borromeo Islands lie in a wide gulf surrounded by mountains. The islands take their name from the aristocratic Borromean family who took ownership of the land in the 16th and 17th centuries. Only the best architects and gardeners were called upon by the family – themselves art lovers and botanists – to breathe life into their ambitious projects. The islands “Bella” and “Madre” were transformed into grand, luxurious residences while the third island, named “Dei Pescatori” after its age-old fishing community, was left to continue its traditional way of life.

Despite their Alpine setting the three Borromean Islands share a pleasant climate but each offers a very different experience. Isola Bella was completely transformed by its occupants: its palace and gardens are the epitome of opulence and luxury. In contrast Isola Dei Pescatori, with its village unchanged by time, offers a fascinating simplicity. The exotic atmosphere of the lush and peaceful Isola Madre can be ascribed to the gardens that almost totally cover it. The Borromean Islands are easy to reach from the lakeside ports and are a must-see destination for every visitor to Lake Maggiore.

Within an hour’s drive from Stresa you can reach the base of Monterosa, the second highest mountain in Europe, or else some of the wildest areas in Italy such as the Valgrande, Devero and Veglia Parks.

The region has many places to visit – natural areas and parks, ski resorts – but the most curious fact is that time here seems at a standstill. You can still see people wearing traditional costumes or people working the land even at very high altitude.

The day before the race participants can visit the botanical gardens in “Villa Taranto” (Verbania), take a boat to visit the magnificent Borromeo Islands or enjoy the lakeside with a relaxing pre-race walk. A unique way to view the course is by taking the cable car from Stresa to Mottarone Mountain from where you can see a full panorama of Lake Maggiore.

See the latest news from Lago Maggiore Half Marathon