An experience to remember 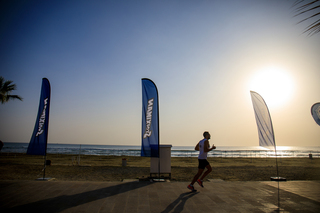 Last year the city of Larnaka put on its first 1st Radisson Blu Larnaka International Marathon and it was a great one.

Almost 5000 runners of all ages, from experienced runners to complete beginners, were given an experience to remember: running along the coastline, passing imposing monuments on the way and finishing under the palm trees.

The race route is almost flat for the entire 42.2km. It runs next to the sea and takes you past salt lakes with flamingos enjoying their last days of summer before moving on to Africa; past the famous Hala Sultan Tekke, one of the most important mosques of Islam; and the final turn is right next to Larnaka’s medieval castle.

After the first edition the race became an AIMS member. The experienced organising team behind it also puts on the iconic Athens Classic Marathon, the Nafplio Marathon, the Crete Marathon and many more. The first race was sponsored by the island’s biggest companies, helped by the Municipality of Larnaka and supported by the Republic of Cyprus Government as it tries to widen the touristic attractions of the island to more than the magnificent beaches and the sunny blue skies.

With all this support the organisers could provide everything that runners have grown to appreciate over the years for a very low entry fee. It includes a running shirt, a goodie bag filled with isotonic drinks and power bars and on free post-race massage.

It was the first ‘green’ Marathon in Cyprus. The Municipality provided special bins for recycling and helped clear up everything just a few hours after the event. The Commissioner for the Environment of Cyprus gave her blessing and Green Dot Cyprus, the top environmental organisation in Cyprus, helped ensure the Marathon was as environmentally friendly as possible.

The City and its residents embraced the Marathon because they saw the benefits it brought to their city and the minimal disturbance to their lives. Race day was a real celebration for everyone as over 15,000 people cheered on the runners taking part.

Come and be part of one of the most important sporting events in the Eastern Mediterranean. Come and experience intense moments of emotion, action and of course relaxation. There is no better way to do that than take part in the second edition of the 1st Radisson Blu Larnaka International Marathon.