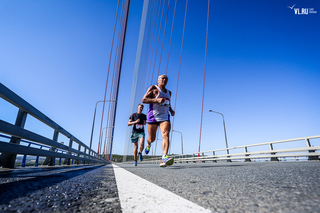 Vladivostok lies in the Far East of Russia: a seaport on the edge of the earth. You can feel the harmonious mix of the East and West here.

Set beside the Sea of Japan, its hills are blown by winds from four sides. Dozens of pristine islands lie offshore scattered in the warm, wild sea. The cuisine is tremendous with an abundance of seafood. The natural and architectural surroundings are beautiful, especially at the time of the race. It is a mellow season with an average air temperature of 16°C, moderate humidity and sunny, breezy days.

Vladivostok – a two-hour flight from Tokyo, Seoul and Beijing – stepped on to the running map only two years ago but has already made a good impression. Last year the number of participants reached 2000 so it is not yet a large event by the standards of world marathons. Even so, people come from far and wide to take part with runners from 89 cities of 18 countries. Cities in the region lie far apart and a marathon in the Far East of Russia is considered as something exotic – but available.

The Marathon course is not easy, with many gradients, but it is interesting. Runners face hills and wind but are surrounded by the beauty of the locality. It is not for nothing that the race slogan is “A reason to be proud of yourself”. Whether you achieve success in the 5km, the 21.1km or in the legendary 42.195km it will be awesome. There is also a 1km race for children.

Participants run on the island, woods on one side and the sea on the other, with the two main bridges of the city spanning across. These are the “Russian” and “Golden” bridges from which you get fascinating views of the city, the sea and hills – and the seagulls which, according to a city legend, sing to runners in a familiar language. The final kilometres are on the main city streets and the finish is in the central square.

There are many interesting sights that are scattered along the route but in addition entertainment platforms are set up for runners and spectators with the central square offering a food court zone, massage tents, theme-based kiosks, games and music.

The day after the marathon is Vladivostok’s ‘Tiger Day’ which features a colourful procession around the city finishing with a concert and salute.

To register visit www.russiarunning.com and pay the registration fee. The backpack, t-shirt and start number with MyLaps timing chip are included in the price. Everyone gets a designer medal on the finish line and each participant in the marathon is insured for 100,000 rubles. Police and medical staff are assisted in keeping the race safe by bicycle patrols throughout the length of the course. Toilets and refreshment points offering water, isotonic drinks, bananas, dried fruit and chocolate are available every 5km. Every runner receives a finish line photo of themselves.

Vladivostok is a free port with ‘relaxed’ visa requirements. Nationals of some countries* can apply for an electronic visa on the website https://evisa.kdmid.ru/en-US/Home/Index
It is valid up to 30 days from the moment of registration for a period of 8 days and is issued free of charge. An invitation, hotel reservations and other documents are not required. The visa takes 4 days to be issued.
[* Brunei, India, People’s Republic of China, DPRK, Mexico, Singapore, Japan, Algeria, Bahrain, Iran, Qatar, Kuwait, Morocco, UAE, Oman, Saudi Arabia, Tunisia and Turkey].