Runner who broke 2:10:00 barrier for the first time 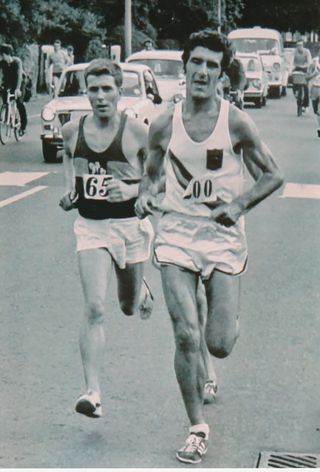 Born in 1942 in the north-west of England and raised in Northern Ireland Derek Clayton made his mark on running history on 3 December 1967 by winning the Fukuoka Marathon in the world record time of 2:09:36 seconds.

It was the first time anyone had run a marathon in under 2 hours 10 minutes. It broke the previous record, Morio Shigematsu’s 2:12.00 set in the Polytechnic Marathon two and a half years previously, by two and a half minutes. It was a landmark achievement.

Clayton focused on achieving results purely for himself. He was completely self-trained and averaged 225–255km (140–160 miles) a week. His relentless training led to numerous injuries and subsequent operations. During 12 years of his wearing training regime he underwent major surgery seven times, four times on his Achilles tendons, twice on each knee and once on his heel.

Clayton came into the Fukuoka race with a personal best of 2:18:28 – as much as 5 minutes slower than some of his rivals. He had raced the distance only four times previously and never competed outside of Australia.

In the early stages he ran alongside New Zealander Mike Ryan. They passed 5km in 15:06,10km in 29:57 and 15km in 44:57. As they reached 20km the wind turned against the runners and Clayton went ahead to record a first half of 1:03:22 while Japan’s Sei-ichiro Sasaki was closing the gap on him.

Sasaki caught Clayton as they passed through 30km together in 1:30:32. Clayton loomed 22cm (11 inches) over the Japanese. Conventional wisdom was that Sasaki’s slighter frame would be to his competitive advantage as the two tested each other. Sasaki suffered a stitch after 34km and faded as Clayton ran 16:05 for the 5km from 35–40km (2:02:16). He finished with a new world record of 2:09:36. Sasaki recorded the second fastest time ever run with 2:11:17.

He never managed to match this high standard of performance in international championships. He finished seventh in 2:27:33 at the 1968 Olympics held at altitude in Mexico City and 13th in the 1972 Olympic Games in Munich (2:19:49). In the Commonwealth Games he failed to finish both in 1970 (Edinburgh) and in 1974 (Christchurch).

On 30 May 1969 Clayton lined up in ebullient mood at the start of the Antwerp Marathon in Belgium. According to fellow competitor Jim Alder, the 1966 Commonwealth Games Champion, he claimed that he had come “to put the world record out of sight”. Nine days previously he had run a Marathon in Ankara (at a not insignificant 950m altitude) recording 2:17:26 in an effort he described to Alder as “a breeze”.

From the gun the Canadian Robert Moore set off at a furious pace to pass through 10km in 29:25. Clayton then passed Moore on a relentless solo run to achieve his objective with a finish time recorded as 2:08:33.4. Clayton later reported that for a week following the race he was “urinating quantities of blood and vomiting black mucus”.

Whatever the effort that went in to this performance the time – or rather the distance that Clayton ran – has always been disputed.
Although accurate methods of measurement did exist – including the ‘calibrated bicycle method’ exclusively used today – the official method used by the Belgian Federation at the time was the average of three car odometer readings. This is known to substantially underestimate the course length.

By contrast the measurement method then used in Japan is still recognised today as likely to yield more accurate courses than those measured by the approved ‘calibrated bicycle’. The reason the ‘wire method’ did not become officially adopted was due to the time and resources required to implement it rather than any concern over its accuracy.