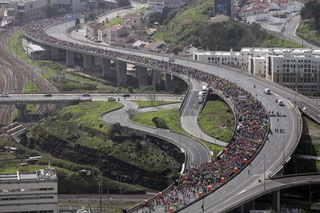 Storm Felix was the main opponent for all runners competing in the 28th edition of the race. For the first time, and only because of the bad weather, the start of the Half Marathon for non-elite runners and for the 7km Fun Run was not high up on the roadway of the 25 de Abril Bridge.

The organisers were forced to change the start and the first part of the course. So thousands of national and international runners were not crossing the Bridge – which is the iconic feature of the race. The Bridge spans the Tagus 70m above the surface of the River.

The elite course was not affected by this change, lying wholly on the north side of the River. Five-time world Half Marathon Champion Zersenay Tadese was counting on taking his fourth victory in the Lisbon Half Marathon and was the most obvious candidate for the 50,000 Euro bonus that the organisation made available for a new world record. Tadese set the current world record (58:23) on this course back in 2010 and ran the second fastest-ever time here in 2011. This year the rain and strong winds made such a great achievement impossible.

Despite the storm 12 men ran under 61 minutes. Winner Erick Kiptanui (1:00.05), from Kenya, in his debut said: “I can run under one hour and if I return to Lisbon I’m sure I will run faster than today, because this is a great course.”

The women started 15 minutes before the men. Three of them had already run under 68 minutes: Kenyans Pasalia Chepkorir Kipkoech and Magdalyne Masai and Ethiopian Belaynesh Oljira. But the winner was none of these as Etagegne Woldu came out on top in a relatively slow but closely-contested race.

On the same course, but a few minutes earlier, the CTT Wheelchair Race took place. World record holder David Weir (GBR) ‘towed’ the race at a particularly fast pace from the beginning for an untroubled win. The seven-time London Marathon winner set the world record on this course last year and confirmed during the post-race press conference that he likes the city and particularly the organisation of the race.

The women’s race was contested right up to the finish line because the winner did not know that she was disputing the victory with a rival; she thought that she was up against a man. Both Cristina Vanessa and Margriet Van den Broek finished with the same time (58:43). At the first turn the Brazilian – who was given the verdict – had more than 500m advantage over the Dutch athlete. But turning into a headwind, with gusts of up to 50km per hour, the gap began to close until they arrived at the finish wheel-to wheel.

Despite the last-minute change for the mass race the organisation was gratified by the number of participants – around 30.000 of them. “Lisbon is a wonderful city, and everyone wants to visit it. I think most foreign athletes came in spite of the bad weather because they came for the purpose of running,” said race director Carlos Moia. The sports representative of the Government, João Paulo Rebelo, and city mayor representatives from both Almada (on the south side of the river) and Lisbon all confirmed the importance of the event for both cities.

There was general recognition of the exemplary way the organisation had handled all the contingencies in the successful implementation of “Plan B”. Portuguese winners Bruno Paixão and Filomena Costa praised the race organisers for the way they reacted to the setbacks and minimised the inconvenience. “Although the elite athletes’ course was not affected it was important to feel that the environment was happy for everyone,” said Costa.

That such bad weather required the course for this emblematic race to be changed ended up being the reason why the race was covered by so many international media outlets.

The Half Marathon course in Lisbon is famous for being flat and fast. Many of the amateur athletes come to Lisbon to beat their own personal record. Many are also traveling with their families to combine the race with a visit to the city. It is almost certain that the good weather will return in 2019.

Perhaps the ‘news storm’ has aroused the interest of more international runners. More than 7000 foreign runners participated this year and even more are expected, coming from all over the world, for the next race set for 17 March 2019.