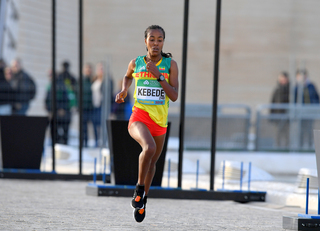 The world record for a women-only half marathon was improved by 14 seconds to 1:06:11 writes Phil Minshull. It wasn’t beaten by race favourite Joyciline Jepkosgei though, who owns the mixed-race standard of 1:04:51, but by Ethiopia’s Netsanet Gudeta.

Gudeta made her decisive move in the 14th kilometre to shake off both Jepkosgei and her little-known Kenyan compatriot Pauline Kamulu and stride on to victory – and a personal best by 75 seconds.

A 13-strong group, consisting of three Kenyan runners and the entire Ethiopian and Bahrain women’s squads, flew through the first 3km in 9:20 and reached 5km in 15:39. The Kenyan trio led with the others sheltering behind them. Between 7-8km Jepkosgei, and Kamulu started to surge and dropped all but Gudeta, fellow Ethiopian Meseret Belete and Bahrain’s Asian record holder Eunice Chumba.

Passing 10km in 31:38, with Belete starting to struggle and an 11-second gap behind, the leading quartette were getting stronger with every stride. Gudeta showed more regularly at the front and then made her move. Initially Kamulu gave chase but Gudeta passed 15km four seconds clear of her with Jepkosgei a further four seconds down. Gudeta looked supremely relaxed as she consistently turned the screw. She passed through 20km (1:02:53) a full 40 seconds clear of Kamulu.
As she turned the corner into the finishing straight alongside Valencia’s landmark Museu de les Ciències Príncipe Felipe the clock had not yet reached 66 minutes. Gudeta dug deep and sprinted over the final 150m to take the title and the US$50,000 world record bonus. Behind her Jepkosgei found her second wind over the last 3km and edged past Kamulu with a kilometre to go.

The men didn’t run as close to record performances as the women but there was no absence of drama as Kenya’s Geoffrey Kamworor romped away over the final 6km to secure his third successive title writes Phil Minshull. A sluggish early pace (14:31 at 5km) as the wind started to pick up led to a relatively modest finishing time. What will be remembered though is the 13:01 split that Kamworor threw in between 15–20km to rip the field apart.

The huge initial pack of almost 70 runners gradually strung out but the pace remained modest and at 10km, reached in 29:28, there were 30 men still together at the front, battling a headwind. Changing direction over the next 5km afforded the runners some protection from the elements – with rain also starting to fall – as Kamworor began to feature more prominently at the head of the race. He headed the pack at 15km (44:13) but it was looking increasingly unlikely that the one-hour barrier would be breached.

For the next 2km Kamworor slowly wound up the pace as a prelude to his decisive move. At 17km he put in a brutal burst of acceleration and a sustained surge which took him well clear of the field.

Behind him Bahrain’s Abraham Cheroben was working hard to move through to second place. He briefly closed the gap on Kamworor to around 10 seconds at 19km before the leader surged again. The defending champion passed 20km 14 seconds clear of Valencia Half Marathon course record holder Cheroben and then pulled further away over the final kilometre.

With 200m to go it looked as though Kamworor would break the hour but he then decided to enjoy his moment in the spotlight as he continued his streak of having taken a distance running world title every year since 2014. Down the finishing straight, his beaming smile stretched broadly across his face, he started blowing kisses to the crowd. No one could begrudge him his chance to celebrate what had been a tactically perfect race.

In 31st place multiple world champion on the track Bernard Lagat didn’t succeed in reducing his recent USA over-40 best of 1:02:00 but at 43 years and 102 days no one older than him has ever run faster than his finishing time of 1:02:16.