Romantic tour of the city which leaves runners with unforgettable memories 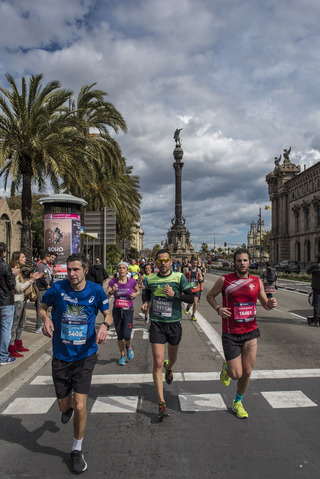 The Avenue Mª Cristina in Barcelona this year was the scene of great celebration for the 40th anniversary edition of the Zurich Marató de Barcelona. The race was the culmination of a weekend dedicated to sport.

The sports Expo exceeded its previous record attendance with more than 70,000 visitors in two days. The Breakfast Run by MRW, with its 2000 bib numbers snapped up weeks ago, was run the day before the Marathon over a course consisting of the last four kilometres of the 1992 Olympic Marathon route. The stage was set on race morning by the Caixabank children’s race as 650 participants performed on the Avenue Mª Cristina before the start of the marathon.

More than 17,000 runners of 87 different nationalities gathered at 08.30 under a cloudy sky and a temperature of 12ºC. In total 46% of them were foreigners and came from countries as diverse as Indonesia, South Korea, USA, Ecuador and Armenia. They enjoyed a completely urban race circuit. The Zurich Marathon of Barcelona offers five-star service to its runners and this has been recognised by European Athletics with the five-star label that it has granted to the race.

It is recognition of the sixteen water stations along the route; of the corresponding medical and physiotherapy services; of the many pace setters; of the convenience of having the start and the finish of the race at the same point; of hosting an Expo which is a leader in its sector in southern Europe; of the 57 animation points which ensure that the race has a party atmosphere throughout the entire route.

For the ordinary runner the Zurich Marató de Barcelona course is fast and has definite tourist appeal. These are two of the main elements that define Barcelona’s marathon. The fully urban route that combines both these virtues offers a unique and unforgettable experience.

After the start from the Avenue Mª Cristina just behind the majestic Montjuic Palace that welcomes the participants runners pass by the famous Camp Nou Stadium, the home of Barcelona Football Club.

From here a wide avenue, the Avenue Diagonal, takes runners to the centre of the city and along the Paseo de Gracia graced by Antoni Gaudi’s modernist monuments such as the Pedrera and Casa Batlló. A few kilometres later runners pass in front of the greatest work of this Catalan architect, the monumental Church of the Sagrada Familia.

The race also takes participants to lesser-known but no less attractive sights of Barcelona such as the Calatrava Bridge, built as part of the new infrastructure for the 1992 Olympics, and the Agbar Tower – a huge modernist office block known for its nocturnal lighting. Next comes perhaps the most attractive part of the course – a 3km long stretch by the seaside – before arriving at the Arc de Triomf and continuing until reaching the Plaza Catalonia in the city centre.

The Via Laietana then takes runners past the 60-metre tall Monument a Colom (Monument to Colombus) to complete the last few kilometres of the circuit along the Avenue Paralel which brings them back to the Avenue Mª Cristina. It’s a romantic tour of the city which leaves runners with unforgettable memories. All this without losing the qualities which make it possible for runners to achieve fast times and new records.

In the last few years the people of Barcelona have dedicated themselves to supporting the race. On Sunday morning thousands come out into the streets along the whole route to encourage the runners and turn the race into a great citizens’ party.