Manifestation of sporting and humanitarian character organized by volunteers 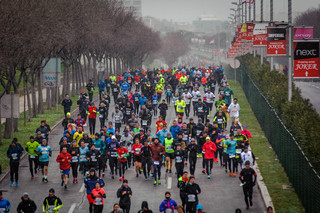 The Split Half Marathon started off as a local race for regional race enthusiasts but a redesign of the course in 2015 has led to it becoming Croatia's biggest half-marathon.

The race is a fully volunteer-based project and as a result has the heart and spirit of the local community behind it.

Split is an ancient Mediterranean city nested centrally on the Adriatic coastline. It offers a unique mixture of historical experiences: the Roman Palace, built by the Emperor Diocletian who selected the nicest place in all of the Empire to build his retirement home; French influences as administered by General Marmont; and Austro-Hungarian heritage derived from Split being one of the Hapsburg Empire’s Adriatic ports. Modern edifices are intertwined with these historical elements in a unique manner best explained by describing the city as having been ‘born of the Palace’.

The race starts and finishes just outside the Palace on the central part of Riva – the pedestrian promenade between the Marina and south side of the Palace also known as Split’s living room. From Riva the course leads you along Marmont Street, the main shopping street in the city, into an area alongside the north wall of the Palace and beside the main city park. You then step forward in time into a modern setting when you join the road which serves as the main entrance to the city. It takes you almost to the exit on the other side of the city before you turn on the overpass and head back again. On reaching the city’s newest skyscraper you turn on to a smaller road which takes you into LORA the largest naval port in the region. You get to run through the restricted naval area and see the Croatian navy’s ships in the harbour.

Then it’s on to the Hajduk stadium where, in addition to soccer legends, you will stand in the footsteps of thousands of ULTRA festival DJ stars. After one circuit around the soccer field in one of most attractive football stadiums in the world the course takes you into Marjan Forest Park – the lungs of the city. First you enjoy the shade of the north side but the real pleasure comes as you circle onto the south side where you run with high cliffs on your right and spectacular views of the beaches below you. The sea, scattered with islands, lies to your left. From here you pass by the Marina and the west part of Split port to begin the finishing stretch back where you started.

Regardless of your running goals the course will amaze you more than once during the race. Supporters accompanying you can follow your progress throughout the race as ‘real time’ chip readings record you passing through checkpoints at the start, every 5km split and the finish.

In support of the main race the organisers offer a humanitarian ‘End Polio’ 5km run alongside the half marathon and humanitarian children’s races (ages 6–15) the day before dedicated to fighting cancer. The “Marathon City” Expo is held in a sports hall about a kilometre from the start/finish where you pick up your bib and can enjoy some carbo-loading at the Tommy Pasta Party. Among the expo exhibitor stands you can see how the half marathon has developed over the years.

Split’s “House of Sports” features some of the world’s well-known sportsmen and women from Split. Split is known as a city of sport because it has the highest percentage of world top athletes in proportion to the size of its population.

The city has also gained worldwide recognition as a holiday destination. It offers entertainment, unique wining and dining experiences, excellent and diverse accommodation. Split Half Marathon is not only a great race but also a great vacation opportunity.

Neither snowstorms nor winter chills managed to keep this year’s 18th Split half marathon from happening, a manifestation of sporting and humanitarian character organized by the Marjan Marathon Club. Over 2000 participants from 40 countries took part. The leading runners reflected the character of the race as a regional attraction, coming from Italy, Croatia, Hungary, Serbia and Montenegro

Split half marathon is a sporting brand in itself. For the period outside the high season it has become a leading tourist attraction and is one of the main motives for tourist visits. The race sets new records for the number of registered competitors year after year.