Lakeside setting for one of world’s fastest races 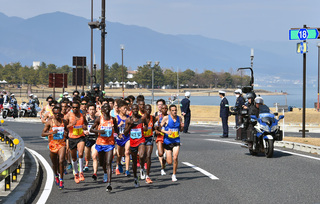 Lake Biwa has the longest history of any Marathon in Japan. It has throughout been a prestigious international competition and marked its 73rd anniversary this year. The number of mass marathons being held in Japan increases year by year but the Lake Biwa Mainichi Marathon maintains its solid tradition as being exclusively a men's international elite marathon race.

The top invited athletes from home and abroad are selected from among those who have run times as fast as 2:03:00. All participants must have met a qualifying time of under 2:30:00 at least once within the past three years. The tough criteria for elite runners ensures that the race automatically qualifies as an IAAF gold label race but it also makes the Lake Biwa race a dream arena for recreational runners. Approximately 300 “elite” runners aged from 20–49 participated in the most recent edition by meeting the 2:30 standard.

Prior to the last Tokyo Olympic Games held in 1964 the Lake Biwa Mainichi Marathon was designated as a rehearsal and a selection race. Towards that end the venue was temporarily switched to Tokyo and its National Stadium for two consecutive years. The achievements of the Japanese runners in the Tokyo Olympic Games greatly contributed to the popularity of the marathon and this has continued to date.

Big name marathon runners have competed in the race such as Tokyo Olympic champion Abebe Bikila, 1972 Olympic Champion Frank Shorter and the Japanese legend Toshihiko Seko. The race serves as one of the national selection races for IAAF World Championships in Athletics and the Olympic Games. Many runners have qualified to compete in the global arena from the Lake Biwa race. Lake Biwa has been designated as one of the selection races for the 2020 Tokyo Olympic Games Marathon. It is keenly hoped that a new Japanese star will emerge from the Lake Biwa race.

In 1964 NHK (the Japan Broadcasting Corporation) broadcast the race live in its entirety for the first time. Today it is broadcast to some 100 countries and regions around the world via the NHK World Premium network.

The course is renowned for its scenic location which commands a splendid view of the shores of Lake Biwa – the largest freshwater lake in Japan. In contrast to most marathons, taking place in big cities, the unique course is blessed with the riches of nature and has proved popular among athletes from home and abroad. In some places the course narrows but this increases the runners’ sense of speed and heightens their awareness of the congratulatory cheers of devoted local marathon fans close by on the sidelines. The flat course also makes it favourable for setting records.

The host city Otsu, in Shiga prefecture, is often cited as the “Lake Country”. It is an historic, attractive city not far from ancient Kyoto and Osaka. Citizens of Otsu eagerly look forward to the Lake Biwa Mainichi Marathon as an event that heralds the arrival of spring in the Lake Country.

The marathon takes place on public roads and through scenery of breathtaking natural beauty. The organising committee of the race is committed to the Lake Biwa environmental conservation campaign and works closely with local government. Both Otsu City and Shiga Prefecture are eco-friendly communities and place much emphasis on tackling environmental issues in a cooperative manner. The Lake Biwa environmental conservation campaign was launched 11 years ago and has taken root firmly among citizens and their communities. On race day local environmental groups put up booths to showcase their appreciation of the ‘Mother Lake’ and carry a strong message to visiting marathon fans.

In an effort to familiarise local children with the sport the race organises a popular 1000m event within the stadium while the marathon is taking place. The intention is to get local children acquainted with the marathons at early stage in their lives.

The marathon organisers are committed to developing the race so that it presents world class runners with the opportunity to further improve times and attract ever greater attention from marathon fans worldwide as one of world’s fastest races.