“As a child I dreamed about exploring foreign places,” says Thom Gilligan. Born in a Boston suburb the Marathon became “engrained in my DNA”. He combined wanderlust with the marathon urge by forming Marathon Tours Inc and helped give shape to distance running as we know it today. 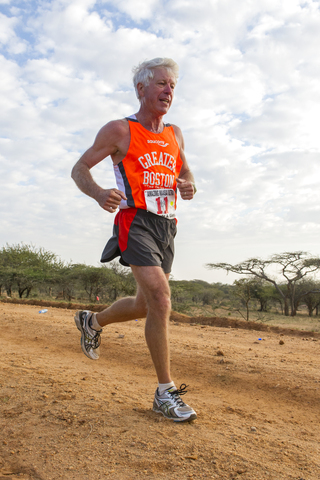 My father took me to watch Johnny Kelley [in the Boston Marathon] just as his father took him to watch Clarence Demar. I set myself a goal of qualifying for the 1977 Boston Marathon. I didn’t succeed but still lined up in Hopkinton as a ‘bandit’ (without a bib number). Boston was one of the epicentres of the first running boom and I wanted to catch that wave.

If anyone told me in the mid-1970s that running would become the popular lifestyle activity that it is today I would never have believed them. But I always knew that I wanted to be in the travel business. In March 1973 BOAC (now British Airways) was hiring some ticket agents as staff at Logan Airport in Boston. I jumped at the chance to wear that uniform with its epaulettes. After three years at BOAC I landed a similar job with Air Canada hoping to move up to a sales position.
Following airline cutbacks I worked in the marketing department for a tour wholesaler that packaged tours sold through retail outlets. The big break came when I was recruited to manage Able Travel, a travel agency startup just outside Boston. It was there that I put my first running package to paper in June 1977. One year later the overweight owner of the agency called me into his office to tell me I was spending too much time promoting trips to running events and that I should concentrate on attracting more traditional travel groups. During this 20-minute conversation I argued that there was strong potential in this developing market but he fired me and offered me three weeks’ severance pay.

So in October 1979, almost out of desperation, I formed Marathon Tours Inc. Without a business plan but armed with confidence and my MasterCard I put down a $534 deposit on a block of rooms at the Barbizon Plaza Hotel on West 57th Street in New York City. I gambled that I could convince a busload of runners and supporters to travel from Boston to run the five-borough marathon. The sport was enjoying its first boom – fueled by competitive long-distance runners striving to better their time or post a Boston qualifier. Doing business as Marathon Tours & Travel I felt that the company could become the brand name in travel for runners. The profit from that full busload paid for my airline ticket to Bermuda to meet with Austin Mott, General Manager of the Elbow Beach Hotel there. The previous year I had brought over 100 runners and friends to the Bermuda Race Weekend. I convinced Austin to provide me with $1500 in marketing funds to promote his hotel as race headquarters. A total of 124 travelers from all over the East Coast flocked to this former British colony for a weekend of running and camaraderie.
That successful trip generated enough funds to rent an eighty square foot office in Harvard Square, Cambridge and MT & T was beginning to look like a real business. The sport was also fast becoming a global phenomenon: Horst Milde had founded the Berlin Marathon in 1974; Anders Olsson started the Stockholm Marathon in 1979; Chris Brasher and John Disley created the London Marathon in 1981. Meanwhile I was trying to attract a clientele: runners who wanted to travel internationally. In the early 1980s New York Road Runners, under the leadership of Fred Lebow, led the charge to entice tour operators to market their event. These big-picture race directors were some of the founding fathers of AIMS. I approached all of them in the very early days to form relationships that have endured to the present.

Other tour operators began to see the business potential of specialising in this niche. In 1987 I thought that an association of running travel specialists could create a network of companies dedicated to the profession of managing travel for runners. I convinced about eight other founding members to form T.O.U.R.S., Tour Operators United for Runners. Our criteria restricted membership only to those who met industry standards for licensing and insurance and had a solid knowledge of the sport of running. Our membership now boasts 35 members in 24 countries.

The second running boom in the 1990s was dominated by less competitive but no less enthusiastic participants pursuing finisher T-shirts and medals. Travel was becoming a mainstream activity in the runner’s lifestyle.

The August 1993 edition of Travel Agent magazine, the travel industry’s largest trade journal, featured me on its cover. In its lengthy article I was quoted saying: ‘we have had a trip to every continent except Antarctica’. Within days of the publication reaching its audience I was contacted by the owner of Marine Expeditions, the pioneer of travel to the 7th continent. They leased Russian research vessels and converted them for tourism. So I went on reconnaissance to the bottom of the Earth in search of a venue for conducting a marathon and half-marathon.

In December 1993 the Wall Street Journal caught wind of my promotional success and wrote a feature article on its front page highlighting this burgeoning generation of globetrotters hopscotching the planet in search of exotic marathons. I believed that we could create a marathon in Antarctica and said so for the article. Deposits flooded into the office from all over the world. We filled two vessels with 160 passengers for the two-week itinerary in January 1995 to King George Island – the site of the first international sporting event in the continent’s 500 million-year history.

It was the most expensive, most remote and most extreme trip yet. But it was our most successful offering to date. I was shocked: but I was convinced that we had tapped a new market of high-end clients looking for new bragging rights.
During the post-race celebration four otherwise unrelated runners delighted in mentioning that they had just completed their goal of running a marathon on each of the seven continents. I immediately started the Seven Continents Club (SCC) to recognise those who attained this goal. A few years later we added a half-marathon division. There are now approximately 675 runners who have run a marathon on all seven continents.

Exotic marathons have sprouted up almost everywhere. We created the inaugural Madagascar Marathon in 2017 and are constantly looking to create or partner with unique destination events. Patagonia, Bhutan and Jerusalem are some recent additions to our race calendar.

I estimate that travel by runners is a billion-dollar-a-year industry. Completing the Abbott World Marathon Majors has become a popular goal for the international runner but gaining entry has become as much of a challenge as completing the event.

After 40 years of this vocation the challenge to maintain a leadership role in destination marathoning remains. How can we continue to provide the best travel services and most rewarding experiences to the next generation of runners?