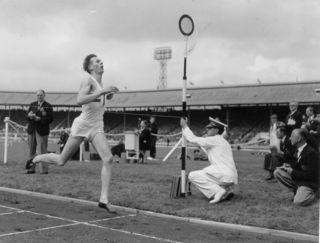 Roger Bannister, who died aged 88 on 3 March, had already become an athlete of legendary status by the age of 25. He set a new world record for the mile on the Iffley Road track at Oxford University and in doing so ran the distance (1609.34m) in under four minutes (3:59.4) – the first time anyone had broken what was regarded as the most significant ‘barrier’ in world athletics.

He did it by using knowledge and insight from his medical studies and getting his friends Chris Brasher (who later co-founded the London Marathon) and Chris Chataway (who later became a UK Government Minister) to pace him. Brasher led for two laps, then Chataway continued, steady but fast, until just after the bell. Bannister then launched himself forward for a 59-second final lap.

He had broken the nine-year old record of Sweden’s Gunder Hagg (4:01.4) but just over six weeks later the Australian John Landy, one of Bannister’s rivals for the first sub 4-minute time, ran 3:58. The two came head-to-head in the final of the mile at the empire (now Commonwealth) Games in August 1954 where Bannister ran to the same tactic: run as even-paced as possible to save his strength for a powerful finishing sprint to the line. Landy started strongly and worked up a lead of 10-15 metres by the third lap before Bannister started to haul him back. Running into the last lap shoulder-to-shoulder they ran stayed together until the final bend, when Bannister kicked away to win just a little later than planned.

He ran just one more championship race, winning the European title later in August, before retiring from athletics. He gained his basic medical qualification a month after the victory over Landy in Vancouver.

He went on to a distinguished medical career and focused his research on the autonomic nervous system, which unconsciously controls all the automatic response systems of the body.

As chairman of the UK Sports Council (1971–74) he introduced a much more sensitive test for anabolic steroids. He was president of the International Council for Sport and Physical Recreation (1976–83), and served on many committees and advisory bodies. He also wrote for the British newspaper The Sunday Times and for Sports Illustrated.

Bannister returned to the Iffley Road track (by then bearing his name) with the Olympic Torch in the build-up to the 2012 London Olympic Games. He was diagnosed with Parkinson’s Disease in 2011 and revealed this in 2014 in a BBC interview after publishing his autobiography.