It is a matter of the place awaiting the race, and at Lake Maggiore the race has arrived.

A race for the place: Lago Maggiore Half Marathon, 8 March 2009 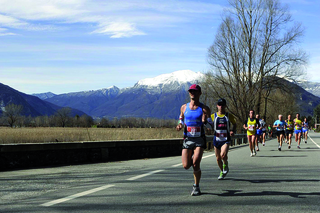 This race was ten years in the making. It started off just as an idea in the mind of the race director, Paolo Ottone – a project to work on for the future.

The inaugural edition only took place in March 2008. The PRO-MOTION Events team hoped for 1,000 participants for that first running, but applications exceeded expectations and the registration limit was raised to 1500 runners. Even so, the race still had to refuse another 500 requests. The result was that 1,413 runners reached the finishing line, coming from 25 countries and from all Italian regions, stretching from neighbouring Lombardy to distant Sicily. For the second edition there were 1928 finishers – 36% up in just one year.

That the race has been such an immediate success should not have been so surprising. Big city marathons have been burgeoning for many years. Rome, Venice, Firenze, Turin and Milan are just a few of the Italian marathons that have made their mark internationally, attracting many thousands of foreign runners to their events. It was only a matter of time before the formula developed from exclusively urban offerings to races staged in more rural settings. Especially when the setting is the Italian Lakes, famous in their own right as a magnet for foreign tourism. Given that distance running is a sport that takes place in the “real world” the more attractive that particular bit of the world, the more likely it is that runners will flock there – just as regular tourists do. It is a matter of the place awaiting the race, and at Lake Maggiore the race has arrived.

The place in question is the town of Verbania Pallanza, the largest settlement on the lakeside with a population of 30,000. It lies only a few kilometres south of the Swiss border, but within easy reach of Milan. This is where the race finishes, and the staging-post for the event, but the start lies towards the south, in the small but historic town of Stresa, with a population of only 5000 people, and runs for the first kilometre past the best “Liberty Style” hotels and buildings, which provided one of the customary stopping points for the early aristocratic European tourists from the 18th century on, during their “Grand Tours” of Europe. Stendhal, Lord Byron, Charles Dickens, and Ernest Hemingway all spent time here. Hemingway set the final chapters of his novel “Farewell to Arms” in the Grand Hotel des Iles Borromines, and the whole town, along with its lakeside promenade, retains a certain nostalgic air of the period.

Runners get to the start by a panoramic ferry boat which crosses the Borromean Gulf, a large inlet along the western shore of the lake that separates Verbania from Stresa. The journey is a visual treat, passing close by the Borromean Islands of Isola Bella – named after King Carlos III’s wife Isabella, Madre, and the tiny island of Pescatore with its fisherman’s village.

This year 200 foreign runners were drawn to participate, coming from 31 countries. The weather is often kind, and for this year’s edition particularly so (clear skies, 12C and almost no wind), allowing some fast running from the elite field and many personal best times among the mass runners. After leaving Stresa the rest of the course is all along the lakeside, passing through Baveno and Feriolo to reach the finish in Verbania Pallanza on the other side of the Borromean Gulf.

A group of seven headed the race before Denis Ndiso dropped back just before 5km and Rachid Kisri a little later. Nicholas Kamakya led the remaining four runners (there was no official pacemaker) until he apparantly suffered breathing problems at 18km. The others kept together until a big sprint finish in which Ezekiel Jafari prevailed ahead of Jacob Yator and David Kiyeng. In the women’s race Aniko Kalovics overcame last year’s winner Melissa Peretti although suffering a slight pull in her left leg. In the Wheelchair/Hand Bike category there were 16 finishers and 16 teams competed in the four-person relay.

After the race runners can relax by the lakeside of Verbania and return to the parking areas either by walking or by again using the panoramic ferry boats. In either case it is worth looking around the area further. A voucher is given to all race participants that allows them free use of the spa in Premia with its natural hot spring. The water, at a relaxing 30C, is bound to aid post race recovery.
Runners will have sampled the local flavour by visiting the Sport Expo before the race, where all kinds of traditional culinary products are offered. Getting a little further away from the immediate lake shore, there is a cable car which departs from Stresa for Mottarone mountain. From the top you can see the entire Lake Maggiore area, and Verbania.

Further afield, there are other lakes, Orta and Mergozzo. Only an hour by car will take you to the base of Monterosa, the second highest mountain in Europe with the highest mountain wall in the Alps. The Valgrande, Devero and Veglia natural parks are also nearby. The region offers a great variety of places to visit and in some of them people still wear traditional costumes and work the land even at very high altitudes. In this area time sometimes seems to have stopped. For runners though that is only after the finish; before then, every second counts.

See the latest news from Lago Maggiore Half Marathon