The course offers a complete tour of the city, taking in Barcelona FC’s famous ground, the Nou Camp, La Pedreda, the astonishing cathedral constructed by Antonio Gaudi, the Sagrada Familia, the Agbar Tower, the Port Olimpic and the famous Ramblas. 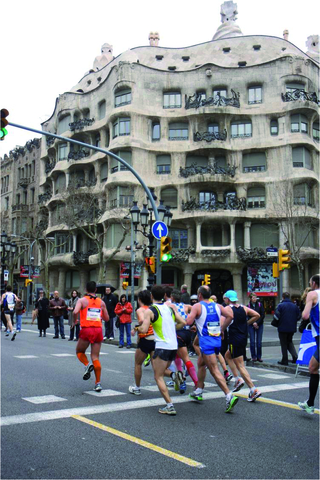 Barcelona is one of the most distinctive cities in the world, with a style and a flavour all of its own.

This undoubtedly provides the Marató de Barcelona with its most attractive and enviable quality. The Mediterranean Sea and the many architectural wonders in the modernist style of Antonio Gaudi are the runners’ travelling companions during significant parts of the race.

For this reason alone the Marató de Barcelona becomes an unforgettable experience.

Nearly 10,000 runners participated and they filled the city streets as if in a carnival, surpassed the record set the previous year. Of the 9700 who registered an impressive 85% completed the race (8726 runners). The average age was 41 years, and for the first time since this re-born edition of the Barcelona Marathon was started Spanish runners were in the majority with 54% of participants. In previous editions most runners have come from outside Spain.

The race again started in the Plaça de Espanya with runners setting off in the direction of the famous Eixample district of Barcelona. The course offers a complete tour of the city, taking in Barcelona FC’s famous ground, the Nou Camp, La Pedreda, the astonishing cathedral constructed by Antonio Gaudi, the Sagrada Familia, the Agbar Tower, the Port Olimpic and the famous Ramblas. After this grand city tour, runners finished back in the Placa de Espanya.

One of the highlights of the Marató de Barcelona is the support given by local people. At 24 animation points made up by associations, cultural organisations and musical groups and spread throughout the route runners were offered noisy encouragement. Many citizens went out on the streets to demonstrate in this way, and to support the race and the runners. Also notable was the army of over 1300 volunteers who were helping the organization by marshaling the course and manning the refreshment stations.

The civic solidarity which this event brings out, in which comprehensive co-operation becomes normal behaviour, leads the organisers to believe that there is room for continued growth. These are the crucial elements for success and ensure a doubly satisfactory outcome: strong support of the runners through good organization and vociferous personal encouragement.

Participation grew by 69% over the previous year, indicating that running, and in particular the Marató de Barcelona, may represent the flip side of the economic crisis.

One of the incentives for people to come to the Marató de Barcelona is the parallel programme that accompanies the main sporting event. The day before the race the traditional Breakfast Run is held over the final 4.4km of the 1992 Olympic Marathon route, allowing participants to enter the same Estadi Olímpic. At the Marató Expo the most festive event of the weekend takes place: the Pasta Party, where more than 6,000 plates of pasta are served out.

Barcelona has always been characterized by its open, friendly and good-natured character, typical of a Mediterranean city, and reflected in a cosmopolitan environment. The city has a dynamism that draws people to its many tourist attractions and keeps the Catalan capital in constant evolution.

The 1992 Olympic Games brought a huge improvement to the city’s sporting infrastructure, and Barcelona is also the home of one of the world’s iconic football clubs, FC Barcelona. The city has had long experience of organising sporting events and will be the venue for the European Athletics Championships next year.

The city has many more attractions and draws in huge numbers of tourists from all over the world, for many different reasons. Numerous museums, theatrical and musical offerings are among these. The Picasso Museum, the Miró Museum or the Museum of Contemporary Art in Barcelona, as well as the music festivals, bring tradition and antiquity together with new trends.

But one of the biggest new trends in Barcelona seems to be running in the Marathon here.