The Marathon is a race of 42195m, but there is no such thing as an exact measurement. Hugh Jones asks: who decides the length of a race? 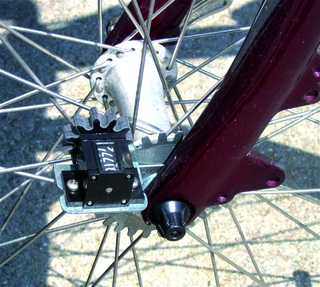 The present method of measuring road race courses, developed in the 1960s by Britain’s John Jewell and American ultra-runner Ted Corbett, has come under fire from runners bearing their own GPS measuring devices.

They usually claim the course is too long. They are probably right, but the excess length is far less than they claim, and their own measurements are nearly always much longer than the race distance.

There is no such thing as an exact measurement. All measurement is subject to error. The official method of course measurement involves a mechanical counter fixed to the front wheel of a bicycle which is then “calibrated” by riding a known distance that has previously been accurately measured by steel tape. The average difference between the start and finish numbers divided by the length of the calibration course yields a factor which can be used to convert numbers registered by the counter to metres travelled.

There is error involved in each stage of the process. There is error in tape-measuring the calibration course (and tape measures themselves are not “exactly” the length stated, but have a margin of error to their length). There is error in riding the calibration course, and there is error in riding the course to be measured. By repeated trials it has been found that the overall error in the method, when used by experienced practitioners, is within 1 part in 1000. So by adding 42.2m to the 42195m nominal length when laying out a marathon the measurer ensures that the distance is not less than 42195m. The actual length is almost certainly more than this, as the GPS wearers complain, but the figure itself is uncertain: it could be anything between 0m and 84.4m longer. The only certainty is that it is not short, but lies somewhere in this range.

The method is simple, transparent, thoroughly tested and proven reliable in skilled hands. GPS, by contrast, is “black box” technology which does not reveal its errors. It spits out a number that users tend to accept uncritically as truth. Blind faith in invisible technology is not the best principle by which to determine anything, but runners will sometimes berate race organisers with accusations of an inaccurate course on the basis of what their GPS watches tell them.

A course measurer using the calibrated bicycle method and a runner bearing a GPS watch are measuring two different things. One measures the course length, and the other measures the distance that that individual covered during the course of the race. Course measurement procedure stipulates it is the “shortest possible route” that is measured, using the entire width of the road up to 0.3m from the kerb. The “shortest possible route” is a theoretical line which approaches an absolute value.

In practice no runner can get close to following this line. If you are running at speed you will not be able to place your feet only 0.3m away from the kerb even around the slightest of corners. For every metre you are wide of this on a right-angle turn you will add 1.5m to the distance you run. This would apply to a solitary runner doing a time trial on an otherwise empty course. In real-life situations where thousands of runners clog the course, the effect is multiplied many times over.

In a half marathon in London (GBR) last year 26 runners claiming that the course was too long posted their GPS distances on the Internet. The data was analysed by Mike Sandford, a course measurer and certifier in UK, who found that the average of GPS measurement was 21.548km (2.2% long) and the standard deviation was 177m (0.8%)
This means that while GPS wearers recorded the distance as “too long” there was no agreement on quite how long it was. Not surprising, as their measurements related to individual cases, not the theoretical minimum of the “shortest possible route” on which genuine course measurement is based.

1. Not starting and stopping the GPS exactly at the course start and finish

2. Not following the “shortest possible route”

3. Loss of satellite visibility under trees and in the shadow of buildings

5. The race organiser laying out course longer than that measured by the course measurer

Most runners immediately jump to the conclusion that (5) is the most likely cause of what their watches convince them is a long course, and completely ignore (2). Although (5) is a possibility, (2) is a certainty. In this particular first-time event the course narrowed in several places early on in the race, causing runners to bunch up. In these conditions runners will go wide in order to find a way around the most crowded parts of the course. At a 180-degree turnaround point running 5m wide would immediately add 16m to the distance run.

Similar information was collected by South African measurer Norrie Williamson and British technical official Bill Reynolds at the Blom Beirut Marathon last year. Among 10 runners who used GPS watches the recorded distances varied from 42.39km to 42.82km, with an average of 42.62km. GPS watches were also set up on the dashboard of the lead vehicle, and recorded 42.65km and 42.66km. To correct for the inability to drive close enough to the kerb at corners a deduction of 150m was calculated, so that the distance driven in the lead vehicles was 42.5km

One runner had used a foot pod and recorded 42.4km. Although using a completely different technology this made an interesting comparison, particularly since she was a competitive athlete who had calibrated the pod on part of the course.

The runner recording 42.39km was also a competitive athlete. These runners were both likely to have paid more attention to taking the shortest line and minimizing any distance they ran over and above the “shortest possible route”.

Williamson suggests other reasons why GPS watches record more than the race distance:

While these may individually have a relatively minor effect on the final recorded distance, the combined effect becomes significant when compared to the levels of consistency and accuracy achieved by the calibrated bicycle method of measurement.

Fitness GPS units tend to over-read distance, and although highly beneficial for training purposes, in races there are significant limitations to their application, above all the inability to follow the theoretical “shortest possible route”. Race participants should bear this in mind before complaining a course is too long.