A race for life 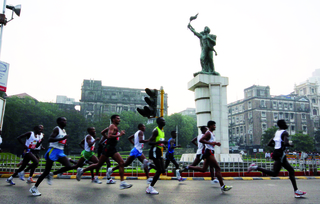 Only seven weeks before the 2009 Mumbai Marathon, on 26 November 2008, Mumbai was subjected to brutal and horrific terrorist attacks.

In an attempt to destabilise the financial capital of India, the attacks were aimed at some iconic structures synonymous with the rich heritage of the city and its growth into one of the major global business hubs and tourist destinations. Scores of lives were lost and the security forces, the city and the country were shaken to the core.

The rest of the world was shocked by this brazen attack. Days of dazed disbelief followed, where everything seemed to be in limbo.

Against this backdrop loomed the 6th edition of the Standard Chartered Mumbai Marathon. Would the city shake off the shackles of terror and rise to the challenge of preparing itself to host Asia’s largest and most prestigious marathon, an event that, over five years, had helped forge a global sporting identity for the city of Mumbai? The answer was loud and clear. Mumbai would not only be ready to host the 6th Standard Chartered Mumbai Marathon, but would put on the grandest sporting spectacle yet, to prove to the world that the city was back on its feet, running.

Less than a month after the attacks, the countdown to the event was launched on 21 December from the Trident Hotel, one of the targets of the terrorist attacks. The entire governing machinery assembled in a show of strength at the official host hotel and announced that the event would go ahead as scheduled. Every security measure would be put into place to ensure a safe running platform for the 36,000 participants who had already registered for the event, six months in advance. The evening was telecast live for an hour on CNBC TV 18, the channel partner to the event, and also received wide coverage through the print and electronic media.

As if responding to a clarion call, the city of Mumbai rose like the proverbial Phoenix. The people of Mumbai unanimously chose the platform of the marathon as their riposte to the forces of terror and destruction. There was no rhetoric, no lengthy speeches. There was no chest thumping, or voices raised in anger. In fact, all energies were channelled towards coming together as one to rejoice in the spirit of life.

Prominent citizens came out to voice their support for the event and exhort the multitudes to join in the celebrations. There was a fresh clamour for registrations, which unfortunately were already closed, but there was no letting up on the fervour. Those that had missed the bus vowed to be there in numbers to cheer on the foreign participants and their own brethren, who were attempting the different categories of races.

As in many distance running events around the world, charity had always been one of the corner stones of the Standard Chartered Mumbai Marathon, with the fifth edition in 2008 generating over USD 2 million, making it the largest single charity generating event in the country. Post 26/11, with patriotic feelings at an all-time high, promoters Procam International were inundated with calls from those who had already registered, seeking information on the different avenues available for raising charity. The official charity partner, United Way, was optimistic that the money raised for charity would reach a new high, and the stage was set for Super Sunday.

Event week was a hectic blur of preparations. More than 800 traffic police would ensure that the streets making up the marathon route would be free of traffic for six hours on 18 January, while the same number of law and order policemen would be on duty to provide a safe and secure environment. Private security guards, in excess of 1000 volunteers and officials from the Maharashtra Athletic Association were part of the support machinery to ensure that things worked like clockwork on race day, while the Indian Navy’s Western Naval Command provided three helicopters to facilitate the live coverage to be beamed to the entire country and major parts of the world. The Get Active Standard Chartered Marathon Expo received a record number of footfalls and even after every participant had collected their running number and goodie bags there was still a demand for running bibs right up until the closing hour on Saturday evening, the eve of Race Day.

Testifying to the professionalism and commitment of the elite athletes, there were no significant dropouts. The presence of multiple Olympic and World Championship gold medal winner Gail Devers, announced to the world that Mumbai was safe again and the event deserved all the respect it could get. She performed her role as Event Ambassador with great commitment and enthusiasm.

It was truly a day of reckoning for Mumbai as the first bunch of 10,000 plus athletes took the flag for the half marathon, signalling the start of the day’s proceedings. This was followed by the Full Marathon, the Senior Citizens’ Run, the Wheelchair Event and the Dream Run, which had in excess of 21,000 participants.

The city was represented by a cross section of people from every field. Politicians, Bollywood stars, business barons, socialites and the common man stood shoulder to shoulder in an unprecedented show of solidarity. It was only fitting that the men’s course record in the full marathon was broken, an apt ending for a memorable occasion.

The Standard Chartered Mumbai Marathon will continue to strive in its efforts to improve and excel in various departments to attract the cream of the world’s long distance running talent. For the rest of the world it may well be just one more date in the annual calendar of running events, but for the citizens of Mumbai it will also continue to be an event that binds the city together.