Fast technical course is also “most beautiful race in the country” 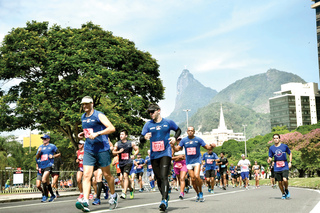 The most beautiful race in the country, the Rio Half Marathon, is run along the South Zone of the “Cidade Maravilhosa”, starting at São Conrado and finishing beside Flamengo Beach. Along the course lie the most beautiful and famous beaches of Rio de Janeiro, highlighting Copacabana.

It will be the 22nd edition of the event, which brings together 20,000 runners from all over the country and from abroad.

Throughout its history the race has attracted some of the world’s most accomplished distance runners including Kenya’s Geofrey Mutai, champion of the Boston, Berlin and New York marathons. In 2016 Brazilian runners reclaimed the top of the podium in the men’s and women’s races with victories from Giovani Santos and Joziane Cardoso.

Considered the best half marathon in the country it has a fast but ‘technical’ route. The race confirmed its importance in 2008 when it incorporated the IAAF World Half Marathon Championships. Zersenay Tadese and Lornah Kiplagat became champions with Tadese running 59:56. Apart from Mutai, who ran a second slower in 2013, no one has come within 90 seconds of this time.

Besides its technical appeal runners can also take advantage of the city’s touristic attractions. There are many famous sights to see such as the statue of Christ the Redeemer, the Pão de Açúcar or ‘Sugar Loaf’ mountain and the beaches of Copacabana and Ipanema.