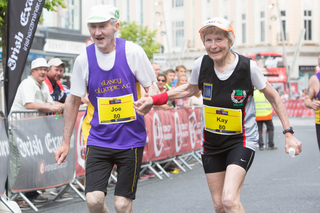 Cork may be Ireland’s second city but as the country’s unofficial ‘real capital’ its countless attractions and attributes frequently place it at the top of the polls.

Fondly known as the ‘Rebel County’ Cork promises visitors some of the most enjoyable experiences on the Emerald Isle. It claims the reputation of food capital of Ireland and boasts a lively café, pub and music scene. This picturesque city on the south coast, steeped in history, combines relaxed vibes with tourist hotspots such as Blarney Castle, Fota Wildlife Park and the Jameson Experience. You won’t be at a loose end during your visit.

You can soak up all the sights, sounds and experiences this eclectic city has to offer on foot. The Irish Examiner Cork City Marathon course is one of the flattest in the country and takes runners on an exploration of the city. It runs through the historic suburb of Blackpool; along the banks of the River Lee; on the line of the 19th-century Passage West Railway with its steep tree-lined embankments guiding your run; through the 620m-long Jack Lynch Tunnel that runs beneath the River Lee; by the iconic Blackrock Castle and its observatory – all leading back to the heart of the city. The approach to the finish is along the medieval spine and onto an exhilarating finish on the city’s main thoroughfare, St Patrick’s Street, to the cheers of thousands of enthusiastic supporters.

Don’t fret if you feel that a marathon is too much of a stretch for you. The Irish Examiner Cork City Marathon offers categories to satisfy both seasoned and recreational runners. Alongside the marathon there’s the option of entering a relay team to share the marathon distance, or the half marathon that joins the marathon for the last 19km of the full course. For younger enthusiasts, there’s a Youth Challenge that gives those over 16 years of age an opportunity to be part of a relay team.

This must-attend event in the Irish sporting calendar is not all about winning; it’s the taking part that counts. Recognised for its inclusivity, it’s for runners, walkers, wheelchair athletes, fitness enthusiasts and supporters. It’s for those looking for a way to get fit, to set a new PB or to set a Boston qualifier, a way to raise money for charity, a fun day out with family and friends and one of the best ways to see all that Cork has to offer.

Now in its 12th year, the Irish Examiner Cork City Marathon is a not-for-profit event organised by Cork City Council in partnership with the athletics bodies, the emergency and health services, Garda Síochána, voluntary medics, and is enthusiastically assisted by local groups, communities and volunteers.