Distance Running 2018 Edition 2 > Opinion > Running out of the dark

Running out of the dark 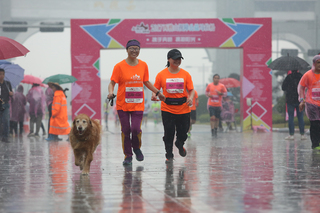 Xiqiao is a town in China’s Guandong province known for its efforts to achieve ecological balance. Outside of the city is a forest park around Xiqiao mountain. This location has provided the stage for a remarkable new initiative: the Xiqiao Mountain Blind Half Marathon. It is China's first charitable marathon especially for visually impaired people.

The aim is to provide opportunities for visually impaired people to get outdoors and ‘run out of the dark’. It acts as a vehicle by which the media passes on the message of disability awareness.

At an individual level the marathon offers a means to rekindle hope, recover beliefs and goals and promote physical and mental health. It also expands runners’ social circle as they establish relationships with escort guides which help their integration into society. As they do so sighted people with whom they come into contact become advocates for groups disadvantaged in this way.

Starting with only seven blind runners in 2016 the second event on 19 March 2017 attracted 154 blind runners and 184 escort guides from 40 cities of 19 provinces. Among them was Qi Shun, world record holder and Gold medalist in the Paralympic Games. There were 78 blind runners in the Half Marathon, 49 in the 3km run and 27 in the 6km. Of all starters 99% finished and runner satisfaction rated 99%. One-third of participants came from outside Guangdong Province. Supporting events were integrated around the running including a concert, a forum on visual impairment running and a food festival.

The blind half marathon has reached millions through a public welfare platform for national crowdfunding. This has increased overall funds by 10%. The event is oriented towards the national public interest. The organising committee covers the cost of transportation, accommodation and catering for all the participants and staff. All surpluses are donated to relevant public organisations.

A special voice-controlled running app has been developed which makes running more convenient for the visually impaired. This has helped blind runners to train three times weekly for at least 45 minutes and doubled the time spent running outdoors.

On the mountain itself the expansion of barrier-free facilities and services have attracted 10 times as many blind people to visit Xiqiao Mountain throughout the year. The event has inspired visually impaired people to go out running and increased the number of escort guides available to support them three times over.

Although the Xiqiao Mountain Blind Half Marathon targets visual impaired runners and escort guides it attracts thousands of spectators who come to Xiqiao Mountain for the race and for sightseeing.

Government entities coordinate the event by securing the site and providing security and medical services. Foshan Chaoma Cultural Activity Planning Co. Ltd. is responsible for delivering the event, including receiving and entertaining the participants. Athletic and other associations located throughout China recruit runners to sign up and help in managing the event.

Many provincial and national TV stations and network media promote the Xiqiao Mountain Marathon and help to attract investment. It is China’s first and only marathon purposefully designed for blind runners, with the route fully meeting their special needs.

The Half Marathon partly competes with public-interest activities for the blind but media attention, exposure and return are much greater for running events than for general activities and the message is carried more widely Through being a running event especially designed for the blind Xiqiao offers broader accessibility to barrier-free sport.

Government provides 40% of the funding, 30% comes from online and offline sponsorship by local enterprises, TV and network media. The remaining 30% is from charitable donations and crowdfunding.

Xiqiao Mountain Half Marathon has created two new records: one is “Chinese blind groups running a half marathon” (by the numbers of participants); the other is “China’s first guide dog leading the blind to finish a half marathon”.

Xiqiao Mountain Blind Half Marathon is in the running for “China’s Best Charity Event” Award. It has been nominated as one of China’s top 10 activities for the blind. Through the advocacy of Qi Shun and the prominent platform that the race provides millions of visually impaired people are motivated to go out and take up running. It is one of the sports that is most beneficial to them and is fast becoming vastly more accessible. Xiqiao Mountain Blind Half Marathon is China’s initiative to allow visually impaired people to get onto the runway and out of the dark.