$40,000 incentive for Australian runners up for grabs 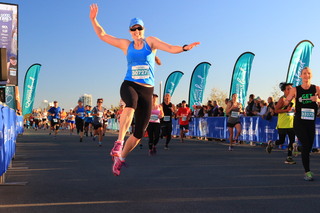 Australian distance runners will have a new incentive to run good times at the Gold Coast Marathon on 1 July as part of the event’s 40th anniversary celebrations.

“We’re confident our internationally-recognised flat and fast course combined with the cool winter weather and our exceptional elite athlete services will provide the perfect environment for an Australian athlete to take the spoils and go home $40,000 richer,” said race director Cameron
Hart. “It is our aim to unearth the next member of the Australian men’s sub 2:10 club and women’s sub 2:28 club here on the Gold Coast.”

Athletics Australia CEO Darren Gocher said the Gold Coast Marathon has been a long-term supporter of athletics in Australia and the incentive is an exciting innovation to grow the sport’s profile in the country.

“While the Gold Coast Marathon’s status as a truly international marathon remains, it continues to be an eager advocate of Australian marathon running and this initiative is just another example of this support,” Mr Gocher said.

The Gold Coast Marathon is organised by Events Management Queensland, a major event management company wholly owned by the Queensland Government as part of Tourism and Events Queensland.

Terms of the bonus offer are that:
- it is open to elite Australian runners who are members of registered Athletics Australia Member Associations and hold full Australian Citizenship as at 1 July 2018.
- it is offered to reward Australian marathoners who finish under 2:10 for males and 2:28 for females.
- if one female runs sub-2:28 and no other female does, nor does any male run sub-2:10, that female will take home $40,000. If a male also runs a sub-2:10, each runner will claim $20,000 each. If one male only runs sub-2:10 and no female runs sub-2:28, the male runner will claim $40,000.
- if a third runner bettered either the male or female benchmark, each runner will claim $13,333 and so on.