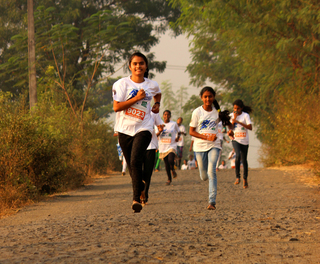 The final AIMS Children’s Series event of 2017 was held on 26 November in Khanivali, a small village about 80km north of Mumbai. This year the distance was reduced from 4km to 2km and the previous out-back course changed to become point-to-point. This allowed another 133 children from a nearby orphanage to be accommodated on the course.

Most children run barefoot and the organisers had patched up the route with loose soil as best possible. There were three age groups both for boys and girls, the children being from grades 8, 9 and 10. A total of 610 registered and 550 participated on the day. All the children completed the race and many clocked impressive times. The fastest was 7:02 and the next only a second slower.

All participants were given a finisher’s medal and a race T-shirt, a canvas school bag, a warm sweater, a warm cap, a summer cap, a pair of canvas shoes (measured individually for size), two pairs of socks, 2 notebooks, 8 ball-point pens, 4 packets of biscuits, a Rubik’s cube, a Frisbee, some hard candy and chocolates, a geometry set, a lunch box and a water bottle. All the boys were given a cricket bat and ball and the girls a pair of badminton rackets and a shuttle. Everyone was provided with breakfast before they assembled for the race and lunch afterwards including ice cream for dessert.

Every child also had their picture taken after the race and a copy was printed out and handed over to them on the spot. The winners received gold, silver or bronze medals, a certificate and a Casio watch for boys and a Timex watch for girls.

Race director Amit Sheth had recruited a team of 40 volunteers from the Borivalli National Park Green Runners in Mumbai and from the Inner Wheel Club of Bombay Sea Coast.

Following lunch there was a party of epic proportions where the children, teachers and organising staff joined in a dance competition. More prizes (solar lamps and watches) were handed out to children who danced well.