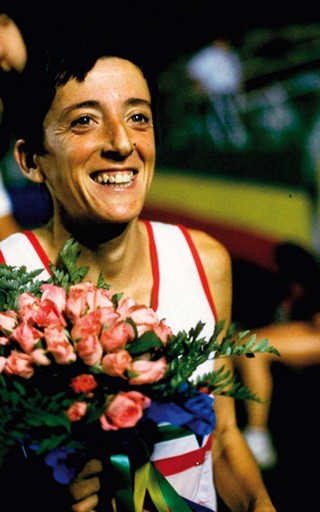 Sep 1987: Portrait of Rosa Mota of Portugal after winning the gold medal in the Marathon event during the World Championships in Rome. \ Mandatory Credit: Gray Mortimore/Allsport
Photo: Gray Mortimore

A familiar image of Rosa Mota in the 1980s, captured by photographers on athletic tracks worldwide, was her elfin figure setting off on a lap of honour while holding aloft a huge Portuguese flag.

She is more than a Marathon great; more than a national heroine. She is the personification of what sport should be about. The victories were never easily won but the grace with which they were achieved made them seems so. “People in Portugal see Rosa and Carlos Lopes and they think it is a simple matter to run 2:08,” complained Jose Pedrosa, Rosa’s coach and boyfriend, back in 1987.

He knew better: it was him who sweated it out in 32ºC heat on the opening day of the 1987 IAAF World Championships in Rome, fretting that Rosa had misjudged her effort. The athletics world watched in amazement as she pulled relentlessly away from the rest to win in 2:25:17 by over two kilometres. Running with such uncompromising commitment and tactical abandon was the only way she was likely to have been beaten – but she did it anyway.

It was not so easy in her formative years either. The diminutive (45kg, 1.57) runner from Porto started training in Salazarist Portugal. She was admonished on the street for her shamelessness in training in shorts. Paternalism lived on in the Portuguese Federation and Rosa had continuous disputes with them about her racing plans. They had tried – with some irony – to block her entry to the inaugural European Championships Marathon for women in 1982 – the victorious debut from which all else flowed.

There were some formidable runners contesting honours in those early years of women’s championship marathons. Rosa beat the soon-to-be world record holder Ingrid Kristiansen in Athens but the following year finished fourth in the inaugural World Championships women’s marathon, won by Grete Waitz.

The first ever women’s Olympic Marathon was held in Los Angeles in 1984 where Joan Benoit won ahead of Grete Waitz and Rosa’s bronze medal was still something of a surprise – to win it she ran four minutes faster than she had ever done before. She chopped another minute off her best in retaining her Chicago Marathon title soon after the Olympics and in the same race a year later, although she only finished third, she reduced her personal best to 2:23:29.

She never recorded times as fast as Samuelson or Kristiansen but it was in head-to-head competition where she performed best. Of 21 career starts she won 14 races and of the others she dropped out of three.

Rosa defended her European title in Stuttgart in 1986 and finished over four minutes ahead of her nearest rival. Such a winning margin was unheard of but in retrospect she could almost be seen to be warming up for her crushing World Championships victory in Rome.

In the 1988 Olympic Marathon she ran a completely different race to that in Rome a year before. She stayed with the leaders but had to fight all the way around the course to make sure the pace didn’t drop. Gradually her opponents fell away until only Lisa Martin (AUS) remained. Commentators remarked that Rosa was visibly unsettled by Martin’s persistent presence as she glanced over her shoulder several times. In fact it was a reflexive reaction to having her heels clipped and Rosa dealt with it by piling on the pressure until she got away to win by 13 seconds.

Her last championship win, the third time she captured the European crown, was more mentally and physically demanding than anything before. Rosa blazed ahead in the first half to lead by 1:43 But Valentina Yegorova made it all up by 34km. You would have expected anyone else to fold there and then but Rosa responded and forged a small lead which she held to the stadium entrance and then won an exciting tussle over the last 500m.

She won the IAAF World Cup race in London in 1991 and looked set to retain her World Championship title but ran off course at halfway with stomach pain and breathing difficulties – something which happened again when she ran in the 1992 London Marathon. After ten years at the top and having played a large part in the establishment of the women’s marathon as a championship event Rosa bowed out of serious competition.