Life in the capital is put on hold for the day 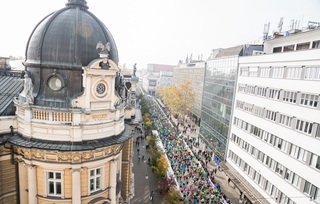 Not many races in the world can boast that they have almost one percent of the population of the country as participants. Volkswagen Ljubljana Marathon can make that proud claim.

Slovenia has a population of two million people. It is surrounded, except for a very short coastline on the Adriatic Sea, by Italy, Austria, Hungary and Croatia. Ljubljana, the national capital, has 280,000 inhabitants. The Ljubljana Marathon attracts 25,000 runners to its various events – and although quite a lot of them are from outside Slovenia this equates to ??% of the country’s population.

It is not surprising that the day of the race is seen by the whole nation as a “racing holiday”. Life in the capital is put on hold for the day as the city unites and cheers on runners throughout the city centre. On the last Sunday in October the streets of Ljubljana are traditionally flooded with runners and spectators who together create an unforgettable experience of the Volkswagen Ljubljana Marathon.

What started in 1996 as a local event with no more than 673 participants has in 22 years become an internationally recognised race with participants from 55 countries and five continents competing in a 10km run, a half-marathon and the marathon. These main races are supported by a rich programme for joggers and children.

Both the start and the finish of all races are in the centre of Ljubljana with the starting line on Slovenska cesta and the finishing line just a few metres away on Kongresni trg. There is no better way to see the sights of the historical city centre as well as some of the diverse neighbourhoods of Ljubljana. Along the course there are also many great places where spectators can catch the action from the sidelines.

What makes running in Ljubljana so special is the energy that carries the runners all the way from the start through to the finish. The adventure begins at the starting line as the runners’ heartbeats become one with the expressive rhythm of the drums on the starting gate above them.

Along the course runners can really feel the vibe of the neighbourhoods they are running through. In some parts of the city families set up homemade refreshment stations at which grandparents hand out homemade baked treats and tea. The older kids fill cups with water and the youngest wave to the runners as they pass by.

In other districts all kinds of different musicians play cheerful songs along with the crowds of spectators. They are united in one common goal: to encourage the runners on their journey. This ends at the finish line with one of the most majestic sights of Ljubljana, the Slovenian Philharmonic standing at the corner of Kongresni trg with the medieval Ljubljana Castle looming right above it.

The entry fee is very reasonable and includes memorable and useful items like a sports bag and a technical shirt that will remind runners of the unforgettable Ljubljana experience. “I will never forget my first one – Ljubljana 2017” was written on the front of the running shirt of one of the women who won her age category.

The 23rd Volkswagen Ljubljana Marathon will be held on 28 October 2018.
See: http://vw-ljubljanskimaraton.si/sl