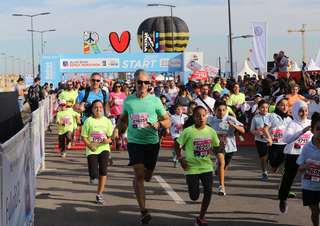 What do you do when you arrive in a hotel after a long flight across continents? Unpack a bit, take a shower and flick on the TV. I did just so after arriving in Delhi a week before the Airtel Delhi Half Marathon.

What flicked up on the screen was the news that the Lebanese Prime Minister had ‘resigned’ while on a visit to Saudi Arabia. Without any chance of talking directly to the players in this political drama the only option for news reporters was to seek comment from others.

News agencies and TV work on a tight schedule – minutes count, but often there are few new ‘facts’ to report. “Voxpops” – going out to elicit spoken reaction from local people – is the main way the appetite of 24-hour news can be satisfied and kept ‘rolling’ from hour to hour.

In earlier times this would have likely meant visiting the souk to gauge the reaction of the Arab ‘street’ – I remember some of these from the time of the ‘Arab Spring’ uprisings.

It so happened that the Blom Bank Beirut Marathon was taking place at the time of the PM’s dramatic and unexplained resignation. All of a sudden the Marathon became the souk – a marketplace of runners.

Among the greatly increased numbers of people who now run marathons there have been some notable political figures – from George Bush down. The next AIMS World Congress will be hosted in Estonia where both the President and the Prime Minister participate in the Marathon. Even if not running high-level politicians regularly offer their patronage to running events and find it convenient to cultivate connections to events which attract such a popular following.

One of the ‘popular voices’ recorded at the Beirut Marathon clearly felt the connection with his Prime Minister that had been established through the event. “He is with us here every year” he said. “We miss him”. It was a simple, almost apolitical point which resonated far more strongly than any amount of political analysis could.

Marathons now offer a channel through which the voice and spirit of a nation’s people can be expressed. How much more mainstream can we get?