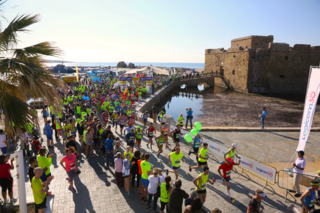 The Logicom Cyprus running festival celebrates its 20th edition this year. In recent years it has grown a lot, offering an attractive all-in package (technical t-shirt, free beer and much more), top-notch organization and an electric atmosphere.

There is also the history, scenery and traditional Mediterranean hospitality that pervades the entire island nation.

The Marathon starts at Aphrodite’s Birthplace in Paphos, where white foam waves break over a stunning rock formation. The tranquility of this picturesque spot prepares the runners both mentally and emotionally for the race ahead. The first half of the course follows the coast before passing through several traditional villages. The final stage is through the centre where runners soak up the city’s buzz and beauty, complete with palm trees and luxury hotels. The finish is by the medieval fort of Paphos where entertainment like no other is there to welcome runners over the line.

The festival also offers a Half Marathon, a 10km road race and a 5km fun run. All these races start and finish next to the Paphos fort but follow different courses. The Half Marathon, with an almost entirely flat course, is the most popular option. The 10km race follows a similar course with palm trees and cheering spectators. The 5km fun run loops around the Archaeological Park, a UNESCO protected site, and never strays far from the sea.

At the common finish runners can enjoy juices, fruit, water, beer, music and entertainment. They can also cool down in the sea and soak up the majesty of the 13th century fort.

The 20th Logicom Cyprus Marathon expects to host more than 2500 runners from 50 countries. Each runner will benefit from fluid stations every 3km along the route (offering water, electrolytes, energy gels, sponges & bananas), a bus pass for the Marathon weekend, and at the finish chip timing, entertainment and a massage service, fruit, juices and free beer.

Pafos was the European Capital of Culture in 2017 and boasts beautiful countryside and historic sites but it is also a cosmopolitan resort with more than 200 hotels: the ideal location to host such a multi-cultural event as the Marathon. Around 50% of participants come from overseas: 25% from the United Kingdom and another 25% coming from other countries (including Greece).

The Logicom Cyprus Marathon is dedicated to Paphos-born Stelios Kyriakides who won the Boston Marathon in 1946. His achievement fueled American donations and he arrived back to war-ravaged Greece with US$250,000 and two ships full of food, clothes and medical supplies.