15 years ago running was a sport for eccentrics and oddballs. Alan Brookes was one of them… 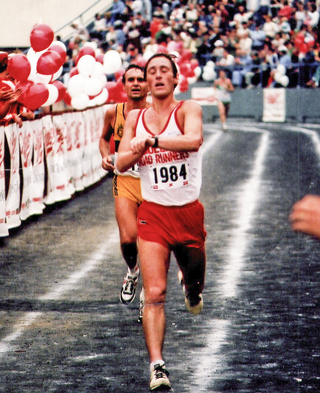 In the past 15 years Scotiabank Toronto Waterfront Marathon has gone being from a modest 1000-runner race to Canada’s largest and most prestigious running event.

It attracts more than 25,000 runners a year from more than 70 countries, brings an estimated $35 million in economic activity to the city, and is live-streamed to more than 140 countries. It incorporates the national championships (2015–2018) and has set the stage for a three-minute improvement in the Canadian all-comers record and a decades-long awaited lowering of the Canadian women’s record.

But these achievements and milestones were a long time in the making, starting from a time when running was a sport for eccentrics and oddballs. Alan Brookes was one of them…

“I moved to Canada from UK as a Ph.D student in Canadian history. I started running as an out-of-shape history professor at the University of Guelph, 100km west of Toronto. My first marathon was in Ottawa in 1981 where I ran 2:44:40. Over the next two years I improved to 2:34:40. I started to organise road races from 1984 when I asked the provincial Federation if I could set up an “Ontario Road Race Series”.

I got Timex as a sponsor and it took off. Then in 1986 they gave me the opportunity to be co-Race Director for the Toronto Marathon, which they owned. This was too much fun, so in 1987 I resigned my associate professorship (with tenure) to become a race director, open a running store and move to Toronto. I wasn’t too good at the retail thing and had to close the store in 1997, but the races flourished.

The contract for the Toronto Marathon only lasted three years but then Molson Breweries asked me to set up the Coors Light Running Series, a six-pack of road races in Downtown Toronto.

From the start we were committed to balancing sport and community at the races. Joan Samuelson won the first 2 editions of the Grand Finale of the Series, the Coors Light Toronto Half Marathon in October. We had other well-known winners like Ed Eyestone and Arturo Barrios.

The Series began with the Spring Run off 8K in April – and it still thrives as Toronto’s oldest, continuously held road race. 1990s winners were Eammon Martin and Jill Hunter who still holds the women’s record. They were followed in the 90s by the likes of Sally Barsosio and Daniel Komen. In 1996 a dish-washer from New York paid his own bus fare to come and win our spring 10km: his name was Khalid Khannouchi. Ed Eyestone had won the race the year before. Steve Jones came to win the Toronto Marathon in 1992.

The races were community fundraising events for the YMCA or the Marvelle Koffler Breast Centre at Mount Sinai Hospital. Sport and Community. In 1999 we added races in Montreal & Vancouver, and the Series became the “Canada Running Series” (CRS). In the year 2000 we added a full marathon to the existing Toronto Half-marathon & 5K, and this became the Scotiabank Toronto Waterfront Marathon (STWM).

At university my research field was 19th-century rural to urban migration in North America, economic and social adaptation and city-building. City-building – making our sport relevant to the broader urban community – is still a central theme. In our seven CRS races, we have over 300 mostly local charities whose runners raise about C$6 million a year. Almost 200 are in the Scotiabank Charity Challenge at STWM, a concept we took from the London Marathon. Since its introduction in 2003 we’ve raised $35 million at the STWM alone. We also have a Scotiabank Neighbourhood Challenge that activates and helps fundraise for neighbourhood groups along the marathon course.

I’d been race director of Run Barbados from 2000 to 2003 under contract to the Barbados Tourism Authority. It was a lot of fun but very time-consuming. Ending my activities there gave me a lot more time to work on CRS and STWM. We introduced both the Scotiabank Charity and Neighbourhood Challenges.

Then in 2004 Ed left us totally gobsmacked when he ran 2:54:49 in his Ranelagh (a British running club) vest at age 73. His message to us was “Don’t limit yourself. You’ll be surprised what you can achieve.” Ed became a global sensation, and he showed us the way. If Ed could become a worldwide running star, maybe we could have a world class marathon. British Sikh Fauja Singh also chose our marathon to achieve his international acclaim as an ageless marathoner and underscore Toronto’s commitment to diversity and inclusion.

I started going to other marathons and to AIMS meetings, to London, Rotterdam, Prague, and other places – to learn. The challenge was to build the event as a legitimate international race, not just the Ed Whitlock and Fauja Singh show.

We’ve grown from two staff to 15 but remain an ops-driven, community-based organisation committed to our mission of “Building Community through Running”. London and Chicago Marathons have been hugely important as mentors and supporters, especially in operations, and that has allowed us to grow. We were asked to organise the Marathons and race walks of the 2015 Pan Am Games in Toronto.

It’s important that our races – especially STWM – reflect the community. Toronto is a new city, diverse and inclusive, “urban-cool” with the likes of Drake, the Toronto International Film Festival, a city of millennials, culture, music, great food, friendly and welcoming. And still, as Peter Ustinov described us in a former era, “New York run by the Swiss.”