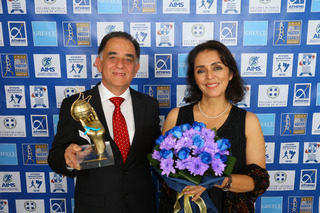 The Maratón de las Flores Medellín was the 2017 recipient of the AIMS Social Award in recognition of their support for social causes.

In 2017, the race organisers committed to support United for Colombia, a landmine charity, a race organised by a breast cancer charity and Pasos de Felicidad, a movement of young runners raising money for disadvantaged communities.

Gustavo Orozco Posada, Race Director of the Maratón de las Flores Medellín comments: “We are honoured that AIMS has chosen to give us this award. We feel very strongly about our social initiatives and we are delighted to receive the award in Athens at the BMR Gala.”

Paco Borao, President of AIMS comments: “I am very pleased that AIMS are recognising the Maratón de las Flores Medellín and their support of a wide range of important social causes in Colombia.”