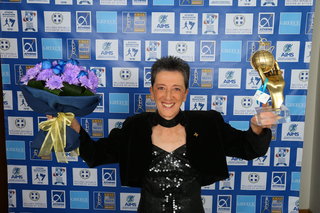 Rosa first came to international attention in 1982 at the European Championships where she won the first official international championship marathon for women, staged on the classic course from Marathon to Athens, Greece.

In addition to the Olympic gold won in Seoul, South Korea she won an Olympic bronze, World Championship gold and three European Championship golds throughout her career. She was also greatly successful in marathons around the world, winning the Rotterdam, Chicago (twice), Tokyo, Boston (three times), Osaka and London marathons.

Rosa Mota comments: “I am honoured to be presented with this award. I would like to thank AIMS and their members for recognising me in this way.”

AIMS President Paco Borao comments: “We are very happy to welcome Rosa to Athens, the birthplace of the Marathon. Her achievements have been an inspiration to women and girls around the world for many years.”