It’s the best way to get to know Moscow and fall in love with it, even if you think you already know the city

Under the Kremlin walls 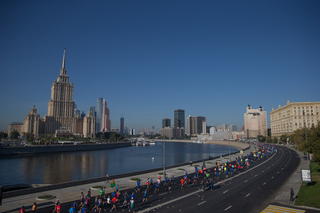 There has been a Moscow Marathon for decades but since a re-launch five years ago the new race has become the largest and most significant marathon in Russia.

Participation has increased fourfold since 2013 and the crowds watching have burgeoned. In 2017 more than 20,000 people from 71 countries took part in the race.

The Promsvyazbank Moscow Marathon is run in the heart of the city. The race logo – a heart made up of two geotags symbolising the start and finish – alludes to this.

The race starts and finishes within the precincts of the renovated “Luzhniki” Olympic complex which will host the 2018 Football World Cup. The Marathon course runs along the embankments of the Moskva River, along the Garden Ring, the Crimean Bridge, the Boulevard Ring, Tverskaya Street and under the walls of the Kremlin. Extensive reconstruction in the city in the last two years has benefitted the race: sidewalks in the centre were widened and houses were restored.

The course’s appeal is noted even by locals. Fewer streets are blocked on the main public holidays than during the Marathon. On the run, participants get spectacular views and can admire Moscow’s world-famous sights, including the White House, Moscow City business centre, four of Stalin’s seven ‘wedding cake’ skyscrapers, the Bolshoi Theatre, the FSB building, the Polytechnic Museum, the Kremlin and the Cathedral of Christ the Saviour. The race course connects the past and future of the city in one picturesque panorama.

The Marathon offers runners an excursion around the Russian capital for only 2000 rubles (about 30 euros) topped by getting a medal at the finish line. It’s the best way to get to know Moscow and fall in love with it, even if you think you already know the city.

Russia has had a running boom in the last few years: from 2009 to 2014 the number of Russian finishers in the world’s 12 largest marathons (including Paris, London, Chicago, Boston, Berlin, Frankfurt, Amsterdam and Athens) increased four times over. Russian runners entering foreign events and competition among race organisers in Russia have led to a rise in organisational standards. Russians are familiar with the best races of the world and have become picky – nudging domestic organisers to constantly improve and develop their services.

Runners in the Promsvyazbank Moscow Marathon receive Asics T-shirts and an invitation to a pasta party. At the finish everyone receives a medal, a blanket, water and fruit. Afterwards they are offered hot food. There are 13 fluid and food stations along the course and two points with energy gels. 24 ambulances are standing by during the event.

Split times are given for every 5 km. Data from the timing check-points are displayed on the online page of preliminary results and using a mobile app. Friends and relatives of runners can follow the competition using their mobile phones. Through services like these Promsvyazbank Moscow Marathon offers an experience comparable to the most successful European races.

Moscow winters are cold but the summers are hot with temperatures reaching 30ºC and above. September is the ideal time for running in Moscow and the best month to visit the Russian capital. The average air temperature during the Marathon for the last five years is 16ºC (2013 was coldest with 11ºC and 2015 hottest with 20ºC). Race day is usually clear or a bit cloudy and rain is unlikely. Nearly everyone runs in T-shirts and shorts.

The race expo is Russia’s largest. Runners pick up their packets, buy equipment and food, visit partner areas, participate in contests and look for their names on a special wall, where each participant is marked. At the 2017 expo a Promsvyazbank Moscow Marathon museum was put up where visitors could take pictures with their country’s flag, see medals and T-shirts of different years, check past results and see a photo exhibition.

Apart from the Marathon there is a 10km race, a corporate relay and a race for handbikes and racing wheelchairs. Marathon and 10km runners previously started together but due to increasing numbers the starts were separated for the last edition, starting in different parts of the Olympic complex but coming together for a common finish. Start times were phased to allow 10km runners to stay on for the finish of the marathon.

Both races welcome amateur runners and elite Russian athletes. Because of the current IAAF suspension of the All-Russia Athletics Federation foreign elite runners are unable to take part in Russian races. Disabled people and charity runners are welcomed. The Marathon’s official charity, the Arithmetic of Good foundation, raises funds for educational programs for orphans. The handbikers and wheelchair racers start 15 minutes before the Marathon runners and complete the same course. Moscow is the only marathon in Russia which holds a dedicated race for athletes with disabilities.

Good organisation and high-quality medals do not alone make a race successful. What really creates a good impression are the people with whom runners have contact throughout their stay – from receiving their bib numbers at the Expo until the moment the leave the finish zone. Volunteering has been one of the key areas of growth for the Marathon. Over the last five years the organisers have managed to attract, train and rally a team of 800 people. The Marathon volunteers are unfailingly friendly, caring and they speak foreign languages. Run the Promsvyazbank Moscow Marathon on 23 September 2018 and see for yourself.