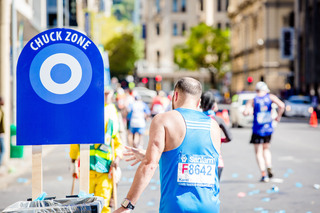 The global distance running organisation, the Association of International Marathons and Distance Races (AIMS) are pleased to announce the Sanlam Cape Town Marathon will receive the 2017 AIMS Green Award.

The award which recognises excellence in environmental practice will be presented to the South African race at the fifth annual AIMS ‘Best Marathon Runner’ (BMR) Awards Gala to be held in the birth place of the Marathon in Athens, Greece on Friday 10 November 2017.

Candidates for the AIMS Green Award are judged on the impact the race has had on promoting environmentally friendly practices in marathon events, how volunteers contribute to the success of the project and the ability for the race to educate younger generations about the benefits of sport and environmental protection.

The two other shortlisted races were the Vodafone Istanbul Marathon (Turkey) and the SwissCityMarathon from Lucerne (Switzerland).

The Award, in its fifth year, received applications from around the world, showing that environmentally sustainable practices are becoming more prominent in AIMS member races.

The Sanlam Cape Town Marathon has placed environmental policies at the heart of their event. For the 2016 event, the entire carbon footprint was measured and offset leading to climate neutral certification and IAAF Gold Label Status.

Measuring the carbon footprint of the race included the transport (by air and car) of athletes. In total, 331 tons of CO2e was offset by supporting three local South African charity projects – Wonderbag, Reliance Compost and Basa Magogo*.

By benchmarking against leading international city marathons, the Sanlam Cape Town Marathon has pledged to become a leader in sustainability initiatives for years to come. An extensive environmental and waste management plan has been created with many ambitious targets such as achieving a zero waste to land-fill policy, which was achieved in the 2017 race.

These actions all come under the banner of ‘Run4Change’, a legacy program that supports the following five pillars; sustainability, development, charities, health, development and peace.

Janet Welham, Race Director of the Sanlam Cape Town Marathon comments; “We are delighted to receive this award. Our aim is to be a global leader in sustainability. Hopefully we can be an example to others as to how to achieve zero waste to landfill and how to measure ones carbon footprint, how to reduce it and how to become a climate neutral event. We would like to thank AIMS for recognising our efforts with this award.”

Paco Borao, President of AIMS commented: “The Sanlam Cape Town Marathon is a wonderful example of a race that has placed sustainability at the heart of their event. Their plans for the future are very exciting. I look forward to welcoming them to Athens, the home of the marathon to receive their award.”