Ethiopian runner in build-up for Frankfurt

Feleke is top of the charts 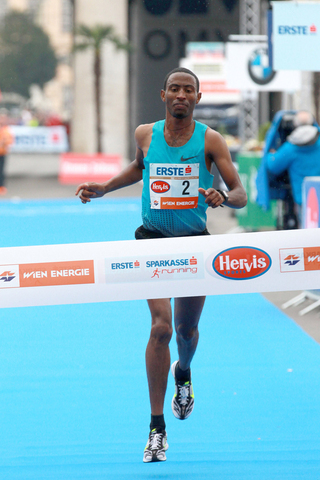 Getu Feleke is the man with the fastest credentials going into the Mainova Frankfurt Marathon on October 29. The 30-year-old Ethiopian has a highly impressive best of 2:04:50 and also ran a superb course record of 2:05:41 in the 2014 Vienna City Marathon.

His compatriot Feyse Tadese is the fastest starter in the women’s field with the world class time of 2:20:27. The Mainova Frankfurt Marathon has been adding to its elite field in recent weeks and the full field has now been announced. In total the organizers expect around 14,500 participants for this IAAF Gold Label Road Race.

Half a dozen male athletes on the current start list have personal bests of under 2:08 and three more, including Germany’s national record holder Arne Gabius with 2:08:33, have broken 2:10.

Frankfurt will mark a return to action after a lengthy break because of injury for Getu Feleke. Among his rivals will be the defending champion Mark Korir of Kenya, who ran 2:06:48 for victory last year and has a best of 2:05:49, making him the second fastest man in the field. Back with an aim of moving one place higher on the podium is last year’s runner-up Martin Kosgey of Kenya, whose best is 2:07:22. One name missing is the runner who finished third in 2016 since fellow Kenyan Cybrian Kotut is injured.

Seven women among the elite field have broken 2:25, setting the stage for what is likely to be another thrilling contest. Vivian Cheruiyot of Kenyan won the Olympic 5,000m title in Rio in 2016 but is now concentrating on road racing. She ran 2:23:50 on her marathon debut and will face five rivals who have run faster. Fastest among them is Feyse Tadese: the 28-year-old Ethiopian has a best of 2:20:27 for second place in Berlin in 2015 and also finished fourth in London earlier in the same year. Also to be reckoned with should be Fate Tola of Germany, runner-up last year who has a best of 2:25:14.