Distance Running 2008 Edition 1 > Opinion > From then to now

This is an edited version of an address given to the 1st AIMS Marathon Symposium, held on 3 November 2007

From then to now 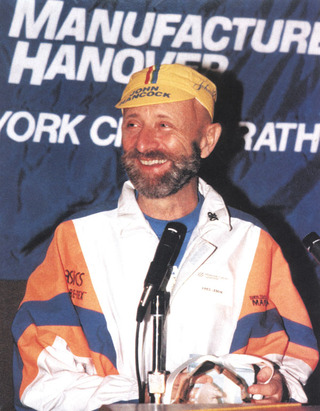 The marathon is a huge public festival which takes over the streets, but a generation ago it was for a few dozen obsessives battling with traffic on backroads. How did we get from then to now?

Marathons today are major earners: for the top runners of course – but also for tour operators, hotels, and airlines. Sponsors compete to use these public events as vehicles for promotion. Charities recruit teams of runners to raise funds through sponsorship.

Yet marathon running 30 years ago was hardly known. It was a competitive sport that took place on the open road in which even the top performers went financially unrewarded.

Fred Lebow’s first New York City Marathon, in 1970, was no different to any other marathon of the time. It was confined to laps of Central Park; it was put together on an extremely limited budget; and it had only 55 finishers. In 1972 Frank Shorter won the Olympic Marathon and the American public slowly became aware of the Marathon, but the field continued to grow only slowly.

The 1976 race changed all that. Almost by accident, it broke the mould of all previous marathon races. Ted Corbitt, a pioneer of road race measurement and himself a notable runner, suggested inviting teams from the five boroughs of New York City to compete in the race. Somehow this was understood by the City as a proposal to run the race route through the five boroughs, and they liked the idea.

Lebow was opposed: “You couldn’t run a marathon through city streets. Even the Boston Marathon, the oldest and most prestigious, only ran the last few miles in Boston itself.” Lebow thought that it would be too expensive to organise and impossible to get all the permissions. The American Bicentennial fell in 1976 and people in the Mayor’s office thought that a citywide five-borough marathon would be a good way to celebrate the occasion. They secured a sponsor and the Mayor’s full support. “The first reaction of the Police Department was “No Way!” But the city insisted, and the Police had to go along with it.”

To capture public interest Lebow head hunted top-name athletes. Frank Shorter had just won a silver medal in the Montreal Olympics. Bill Rodgers had twice won the Boston Marathon, the most well-known race in the world. A head-to-head competition between two American runners – both of them among the best in the world – is a distant dream nowadays, but in 1976 it was what launched the Marathon.

Entries poured in. They were capped at 2100. Lebow’s account of that first City marathon makes clear what an adventurous gamble it was. What is taken for granted today was unknown, or uncertain. Would traffic restrictions be enforceable? Would volunteers show up? Would bystanders respect the course? And would all those runners, half doing it for the very first time, actually enjoy it? They did. It was a resounding success.

The following year there were 5000 runners and for its 1979 edition the New York City Marathon accepted 14,000 entries, a seven-fold increase in three years. Yet even this wasn’t enough to meet the demand. One of the entrants was Chris Brasher who, spellbound by the experience, resolved to put on something similar in London.

What had been born on the streets of New York quickly attracted emulation. The Berlin Marathon, founded four years after New York, moved out of the Grunewald woods and on to the streets of the city in 1980. The following year Chris Brasher inaugurated the London Marathon. Suddenly, no major city in the world was complete without its own marathon.

In founding the London Marathon Chris Brasher cited, among his objectives, “to provide happiness and a sense of achievement.” It was this which explained the runaway success of the marathon. In London 20,000 people wanted to run and 7,000 were accepted. The following year, when the race coincided with the foundation of AIMS, 90,000 people applied to run and 18,000 were accepted.

Fred Lebow was there. He generously acknowledged London’s ascendancy. But it was he who had laid the foundations of the Marathon movement as we have known it for the last 30 years. Fred Lebow’s experience in setting up the world’s original mass marathon provided a template for those who came later.

What New York had done was tackled by all the other events that followed. The struggle to stage a controlled start. The detail of how to guide runners smoothly around the course. How to keep the finish line free of obstructions. How to give the best possible view of it all for the onlookers and media.

Conceptually these are simple problems but become complicated because they take place in the real world. Compared to the choreographed environment of an athletic stadium, Marathons looked chaotic. “In those days, road racing was treated like the bastard offspring of track and field,” said Lebow.

But a firm anchor in the real world was always the strength of the reborn sport. The streets are not a stage for selected actors to perform. They are up for grabs. Anyone can come and have a go. And come they did. Like Chris Brasher, at first dozens but eventually thousands of British runners crossed the Atlantic just to run in the New York City Marathon.

Britain was no special case. In France, Italy, Germany, Spain, Mexico, Brazil, and many other countries, runners wanted to go to New York. Usually they stayed for a week. Demand increased, hotels put up their prices and a lot of money was made.

Fred Lebow may not have seen this ahead of time, but he seized the opportunity. New York became the most international of marathons. It pioneered the trade in running tourism which was continued through AIMS. New York’s success demonstrated the pressing need for an organisation like AIMS, for at least two reasons. The first was to set some basic rules. Marathons had to be marathons, 42,195m long. Other standards also applied, but with less certainty. They could best be encouraged by offering advice and help, and AIMS was well placed to assist.

AIMS also offered an ideal channel through which to promote running tourism. This was the most valuable card a race could play to its city authorities, to national government, to media outlets and to business interests both local and national. In most places it was the key consideration in getting a race onto the road.

Since AIMS’ foundation, 25 years ago, membership has mushroomed to approach 250 events. AIMS’ very existence is part of that recipe for success. It is a global enterprise. We have the same interests but we come from very different places. As Chris Brasher said, the Marathon can “show to mankind that, on occasions, they can be united”. There can be no greater achievement.