One race above all came to define the marathon, claims Hugh Jones – the 1908 London Olympic Games race 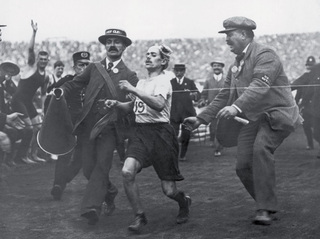 A hundred years ago, on 24 July 1908, a race was run that led to the marathon becoming a fixed length of 26 miles and 385 yards, or 42,195m. Up until that time – marathons had only been around for 12 years – the distance had been based on that between Marathon and Athens, about 40km, but not stated in any definite terms.

The marathon race in the 1908 Olympic Games in London changed all that. It unfolded with such drama and so many further consequences that the distance almost haphazardly arrived at in that race became the standard. It was immediately adopted for re-matches between the same leading players over the next few years – to settle bets on the outcome – and when the amateur authorities that governed the sport came to make a ruling 16 years later, they could not ignore what had become lodged in the public mind as the defining moment of the event.

The course was modelled on the Marathon original – run to the capital city from a place of historical significance. The main mover of the London Olympics, the polymath Lord Desborough, immediately saw that proposing Windsor Castle as the starting point could perhaps engage the King’s direct interest and support. The finish would be at the newly-built stadium at White City – the centrepiece of the Franco-British Exhibition which ran for most of the summer of 1908.

What was to happen in between these points was handed over to Jack Andrew, secretary of the Polytechnic Harriers Athletic Club. Several trial races were held to select the team, but the most significant of these was from Windsor to Wembley, over slightly less than 23 miles, of which 0.5–21 miles was on the eventual Olympic route.

A year before the Games the race distance had been announced as 25 miles but changes were made to the finishing section as it approached the city to avoid cobbles and tramlines. The route fixed upon by Andrew, arcing north through a series of villages on its eastward trajectory towards the capital, turned out to be nearer to 26 miles. According to the race programme the start location depended upon the hope, which was realised, “that the King will graciously consent to the start being made from the terrace of the historic Castle, in which event the distance will be about 26 miles to the edge of the stadium track”.

Previous Olympic organisers had named a distance from the start of the marathon to the stadium, and left detailed finish arrangements to the team organising the events on the track. This arrangement was unchanged in London, where the distance from the stadium entrance to the finish line under the Royal box was 385 yards when run clockwise around the 586.6 yard track (three laps to a mile). Running clockwise was fairly common practice at the time.

It can only be taken on trust that the stated distance was correct. The 1908 route remains very much intact today and the documentation from the time describes some of the mile points with precision. One mile marker, the first, which says “25 miles to the stadium” is fixed to the wall of a house in Eton. The starting position is only defined as “700 yards from the Queen Victoria Statue” and assuming that this was indeed so, modern measurement indicates that this first mile could be 30m short. The next two miles of the course measured a total of 14m short.

Whatever the actual length of the course the belief that it was 26 miles from the start to the stadium and another 385 yards on the track inside the stadium is what fixed the distance for all the later re-matches between the Olympic protagonists Dorando Pietri, Johnny Hayes and Tom Longboat, and eventually led to the standardisation of the marathon distance.

The race started at 14.33 from the East Lawn of Windsor Castle, adjacent to a memorial to Queen Victoria’s favourite dog, Dako, and with few but royalty and officials in attendance. The field of 56 runners from 16 countries were lined up on the narrow path with Pietri near the back. Even so, he emerged through the gate onto Castle Hill, after about 500m, in fifth place, according to the report in The Times. They swept down the hill and over the River Thames into Eton, with the first mile being timed at 5:01 (3.07/km). The man setting this torrid pace, the Scottish champion Jack, slowed over the succeeding miles (5:10; 5:31; 5:36; 6:00) but led the race for five miles (8km) after which he “dropped to a walk”. Many of the runners seemed unfamiliar with the advantages of holding to a steady pace, and followed Jack’s lead. Charles Hefferon of South Africa and the Englishmen Duncan and Lord were only 10 seconds down on Jack at four miles and six seconds behind at five miles.

To be selected the English runners had all run trial races over courses which varied in length from between 18 to 24 miles – long enough to demonstrate the advantages of careful pacing. All that was thrown to the wind in the mad charge out of Windsor. Two English runners, Lord and Price, led until 10 miles, at which point Price went ahead. Hefferon and Pietri trailed by around 20 seconds. Price built up a 40-second lead within the next two miles, but lost it in the next three and at 15 miles he “sat down, leaving Hefferon with the lead”. Lord trailed off while Tom Longboat overtook Pietri before 16 miles, but then also faltered. By 19 miles Pietri was back in second, three minutes behind a now tiring Hefferon.

On the “dusty road” between Harrow and Harlesden Hefferon clung on tenaciously as Pietri gradually eroded his lead. At 23 miles he was still 2:28 ahead, but just past 24 miles he dropped to a walk, and Pietri passed him. Johnny Hayes, of the USA, had been in third place from 21 miles, and lagged Pietri by about five minutes. Pietri’s pace was down to eight minute miles, but his 26th mile was reported by The Times as taking 13 minutes. Hayes would have been closing down on him quickly even before Pietri turned into the passageway leading to the stadium – and collapsed.
Regaining his feet, he then started around the track in the wrong (anticlockwise) direction. In the confusion of correcting this mistake he fell again. As he struggled around the track, surrounded by an entourage of officials, Hayes entered the stadium when Pietri was about 100m from the tape. Pietri fell again only 30m from the line, but according to The Times “when picked up finished with so strong a sprint that had he been left alone he would in all probability have accomplished the necessary half-lap unaided and still have just won.”

Pietri was first announced as the winner but the race was awarded to Hayes after a protest by the American team managers. Princess Alexandra, who had been on her feet with the rest of the crowd as they willed Pietri around the track, awarded a cup to him the next day for what Lord Desborough described as “being practically, if not de facto, the winner.”

Dorando Pietri had only just made it into the Italian team that went to the London Olympics. He he had to withdraw from the trial race, held just seven weeks before the Games, at around 30km. Then on 7 July, just 17 days before the Olympic race, he ran a solo time trial over 40km in Carpi, recording a sensational 2:38 in a temperature of 27C. The performance secured him the financial backing of the Carpi athletics club La Patria to go to the London Olympics.

Born in Mandrio, just outside Carpi (the town which today hosts the Italian Marathon) on 16 October 1886, Dorando Pietri was the third of four sons. At 14 he was employed as a baker’s delivery boy, and the first sporting interest he had was cycle racing. At age 18 Pietri watched the town square in Carpi being marked out for a lap around which champion runner, Pericle Pagliani, was to run 10000m. Boys from the town joined in after a couple of laps, and most of them dropped out soon afterwards, but Pietri kept going to the end, finishing just ahead of the putative champion. A serious cycling crash in 1904 may have also helped determine him to switch disciplines to long-distance running, and he quickly established himself with an Italian half hour record. Next year he won a 30km race in Paris.

He went on to compete in the “Intermediate” Olympic Games held in Athens in 1906, but after a bout of seasickness on the short voyage to Greece he suffered stomach pains before and during the race. At first the pains held off, and Pietri built up a five-minute lead in the first 10 miles. The pains then returned and he dropped out at 24km. Shamed by the experience, it was only a year later that Pietri regained form but even then it eluded him in the longer distances right up until his solo run practically on the eve of departure for the Games.

The “assistance” Pietri had received to get him over the Olympic Marathon finishing line first was shrugged off by many as inconsequential, and his disqualification unjust. Public sympathy was on his side and the presentation of a specially commissioned cup by Queen Alexandra only increased public awareness and epitomised the epic nature of the event. Pietri’s older brother Ulpiano, who had lived in London for several years, moved quickly to exploit the opportunities this presented. He arranged for the cup to be publicly exhibited and negotiated with the American impresario Pat Powers to stage re-matches between Pietri and Johnny Hayes.

The first of these took place in New York on 26 November 1908, billed specifically as “a reproduction of their struggle over 26 miles and 385 yards of English road”. It actually took place over 262 dusty, smoky laps of a 10-to-the-mile track at the old Madison Square Garden. A capacity crowd of 16,000 wildly partisan supporters from the Italian and Irish immigrant communities saw Pietri draw gradually away from Hayes in the final mile of the race to win by half a lap in 2:44:21 – 11 minutes faster than the Olympic winning time.

Only three weeks later Pietri ran against Tom Longboat, in the same arena but collapsed with the effort of attempting to match the Canadian’s pace over the last mile. The drama further increased public interest, and after another three weeks the pair met again in Buffalo, where Pietri ran himself into the ground with too fast a pace, and retired at 19 miles. The madcap schedule continued with further races after another week, then another 11 days, both of which he won against nondescript opposition.

He met Hayes twice more, in April 1909, when they were both beaten by Henri Saint-Yves, and January 1910, when Pietri won in the final 100m sprint-out. Marathon mania receded in 1910 and by that time Pietri’s health showed signs of deterioration. Despite his brother Ulpiano’s urging, he returned to Carpi. In 1909 he had married and, with his brother, bought a building on the main piazza which became the Grand Hotel Dorando.

It turned out to be too grand, as custom was slow, and in 1917, as the First World War raged, the brothers sold up. Dorando bought a taxi business, first in Carpi then on the Italian Riviera. He became a tourist guide and de facto attraction of his own, constantly re-telling his Marathon deeds until he died of a heart attack on 7 February 1942, aged 56.