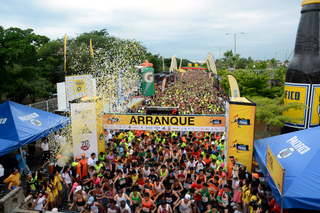 Mazatlan is known as the Pacific Pearl – with its beautiful beaches and its three islands at paddle-board distance. The city is ready to receive thousands of runners on the first weekend in December for the XIX edition of the Gran Maraton Pacifico.

The historic centre, the tallest natural lighthouse, the Venados baseball season, renowned hotels and the new part of town combine to offer the perfect atmosphere for a Mexican getaway.

What started as a small event 18 years ago has developed into to a big sporting party that hosts thousands of runners and their supporters from all over México and from around the world. There were 1200 runners in the first edition in 1999 but the intention was always to become one of the city’s biggest annual events. The scenic route runs alongside beaches, through the port of and along the longest malecon in the world.

Nowadays 12,000 runners and many more spectators eagerly anticipate the December date. The traditional “banda Sinaloense” draws everyone in with its cheerful notes and makes the race an unforgettable experience.

The “Prestame tus Piernas” (‘lend me your legs’) race consists of a minimum of 3 runners who help runners with an incapacity to cross the line as a team effort. There is another emotional event called “Alegría (Joy) race” where kids with different capacities give everybody a life lesson by showing their courage and will to reach the finish line. Another event is staged for the mascots of local teams and businesses who strive to be first in a small race which brings mishaps and laughter in equal measure.

On Saturday afternoon baby sea turtles are released back into the sea. Everybody can help our little friends finish their own race back home. At night-time on the eve of the race Mazatlecos and visitors gather together on the malecon for the shower of light with which the fireworks event bathes the coastline.

This year’s Gran Maraton Pacifico offers runners the chance to take part in the World Half Marathon championship to be held in Valencia (ESP) on 24 March 2018. For all this and much more visit us at www.maraton.org and register to be part of this great event.