‘Mystical and symbolic’ race connects with heritage of Peruvian capital 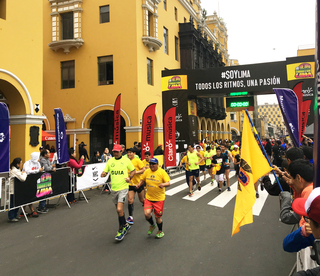 Lima’s Half Marathon is probably the oldest 21km race anywhere in the Americas – or in the world. Organised by Peru Runners, it is run right alongside the Pacific Ocean.

This year Peru celebrated the 108th anniversary of this important event. It commemorates the chasquis – agile and athletic messengers of the Inca Empire who ran long distances to communicate important news – and an ancient culture that has never stopped running.

The Lima Half Marathon is a sporting event with a difference. It connects with antiquity and the nation’s history and makes Peruvians proud of their heritage. It grew from the dream of a group of patriots around 1909. The dream was handed on from generation to generation, deepening in the public consciousness and especially in the minds of those who fought indomitably and courageously for a better country. Those Peruvians came to the national capital from all over Peru: from the North coast, the South, from the Amazon, the Jungle, from the highlands, and the toughest runners from the Andes.

Thanks to their efforts Lima today is a more representative city, less centralised and with a greater diversity of cultures and rhythms. As a result a certain passion and pride has grown up around all that is Peruvian and authentic: our gastronomy, our geography, our entrepreneurs, our athletes. This way, Lima has become a very diverse capital city, with runners of diverse origins and rhythms.

The 108th Lima Half Marathon & 10km took up this theme by celebrating each and every one of the Peruvian people. The slogan of the race was “Todos los ritmos, una pasión” (“many rhythms, one passion”), making a reference to the different rhythms (pace per mile) of the runners and the same passion they feel to run.

The starting line is located in the iconic main square of Lima in front of the Government Palace. The race finishes in the majestic Parque de la Reserva – Circuito Mágico de las Aguas. This is the world’s largest water source complex (according to the Guinness Book of World Records 2007). For the runners it is a true luxury as it is the only race that starts in such an important and emblematic location in the city.

Running alongside 7000 Peruvian and foreign runners is an unforgettable experience because you feel the energy and good vibes of each and every one of them. It is a well-organised, friendly, imaginative, inclusive, fun and colourful race with a route which is undoubtedly the most inclusive in Lima. Between its inspiring start location and its imposing finish it passes through five of the most traditional districts of the capital: Downtown, Lince, San Isidro, San Borja and Miraflores.

On the technical side the lap is characterised by several inclines which makes it a complex sporting challenge – but still charming. Besides which the joy of the spectators, the hydration points and live musical shows en route gives the runners a unique experience.

As soon as you cross the finish line, the preliminary results are sent to your mobile phone thanks to the official timing company Chronotrack. They make their checks and a couple of hours later the official results are posted on the website.

At the finish line you see great joy amongst all the many nationalities that take part in the race, coming from many different countries of Europe and the Americas.

The race had social impact through its support of three representative regions. For the Costa region (coast) about 10,000 bottles from the event were recycled in collaboration with the start-up company Trashure to build a classroom. For the Sierra region (the highlands), it became possible to donate shoes and sportswear for athletes and children of the Andes through the NGO Chaki Wayra. For the Selva region (Amazonian Jungle), the race continued its long-standing environmental support through the funding of Flor de Caña and Conservamos por Naturaleza, and in particular the planting of 200 trees in the Peruvian Amazon. The 7000 runners who participated in the race not only demonstrated their physical prowess but also made it possible for these social causes to make Peru a better country.

The organisers of the Lima Half Marathon & 10km, Peru Runners, officially named Santa Rosa de Lima (Saint Rose of Lima) as the patroness of the race. She was the one responsible for working miracles in the mind and soul of all those participants who crossed the finish line with huge smiles on their faces and tears of joy in their eyes – for they had fulfilled their dreams.

The race is not only technical but also mystical and symbolic for all its citizens – and helps them towards becoming more and more proud of their country.

We invite you to become a Peruvian Runner by participating in the 109th edition of the Lima Half Marathon & 10km next year.