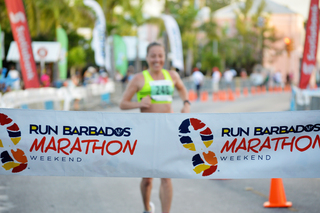 Barbados is but a tiny island, a mere dot in the ocean on most world maps, measuring little more than 30km by 20km. Yet every year Barbados attracts huge numbers of visitors from all over the world ranging from the sun and sea seekers to Hollywood A-listers to sports enthusiasts.

This year, the Caribbean’s oldest road running festival, will celebrate its 35th year when it kicks off in December at the Bay Street Esplanade overlooking the magnificent Carlisle Bay. “Run Barbados” was conceptualised by locals, Sir Austin Sealy and Carl Bayley and for the first few years after its start in 1983 consisted of just two races, the “Bridgetown 10K” and the Marathon. Today, this exciting event has evolved into one of the premier sporting attractions on the island with five running races and a walk spread over three days.

Over the past three decades the Run Barbados Series has attracted a variety of runners of varying ages and abilities from recreational to world class and hailing from all over the world. From inception world-rated runners such as John Treacy, Rob de Castella, Geoff Smith, Alberto Cova, Ron Hill, Hugh Jones, Dylan Wykes, Catherine Ndereba, Jill Hunter and Carey May to name just a few, have run through the island’s streets. The first-ever IAAF World Marathon champion, Australia’s Rob de Castella won the first Run Barbados men’s 10km race. Hugh Jones, the first British man to win the London Marathon (1982) won the Barbados Marathon six times between 1990 and 1996 and still holds the race record (2:22:33) that he set in 1991. Jill Hunter’s 10km record of 32:44 set in the 1990s also still stands.

There are many loyal visiting runners who have returned multiple times and made firm friendships both with Barbadians and other returning foreign runners. The longevity and popularity of this significant event on the Barbados sports calendar can be attributed to these faithful runners, both locals and foreigners, who return year after year and then spread the word to their friends and clubs back home. None more so than eleven-time marathon winner American Kim Goff who travelled to Run Barbados for twenty-five consecutive years up to 2015 and noted, “It is a truly wonderful event with incredible participation of locals and visitors.” Runner Sarah McLoughlin is another example: she has been visiting Barbados from the UK for eighteen years to holiday and take part in the annual event. “It is the only country I have been to where I just relax as soon as I step off the plane,” Sarah explains.

The choice of races around the world is endless but the Run Barbados event has distinguishing characteristics that can provide the experience of a lifetime. The event doesn’t offer the large pre-event expo or the generous loot bags associated with mega-marathons but the sheer beauty of the island in conjunction with the small-time charm, laid-back atmosphere and friendly people attracts repeat visitors such as Goff and many others. The 2016 Run Barbados registered over 2000 entries across the six events. Over 80% of runners were visitors, coming from across the globe: Canada, USA, France, Spain, Germany, Malaysia, Colombia, Venezuela, UK, Sweden and many Caribbean islands. Barbados is easily accessible, with flights arriving daily from many major cities.

The three-day schedule allows runners to take part in several events. A wonderful camaraderie results as old friends re-unite, new friendships are made and après run activities planned. It epitomises the event slogan, coined by Alan Brookes of the Canada Running Series in 2000 when he was race director in Barbados: “Come for the Run, Stay for the Fun!” The Fun starts on the Friday night with many runners donning outlandish costumes for the Fun Mile. The lively atmosphere continues throughout the weekend with live steel pan music on the routes and island style entertainment at the Finish line. Many runners cross the finish and dive into the sea before sampling local brews and food.

Runners from the old days may have fond memories of the “Airport to Heywoods” Marathon route that led runners through the fishing town of Oistins, along the south and west coasts, passing through Bridgetown and Holetown to reach the finish just north of Speightstown. With time comes change and the current route is a two-lap course starting from the Bay Street Esplanade and going through Bridgetown to Paynes Bay on the “platinum” west coast and back. The Half Marathon completes one lap of the marathon course.

The start and finish of the “out and back” mostly flat routes are at the picturesque Bay Street Esplanade, opposite the Prime Minister’s office and adjacent to the white sand beach that lines Carlisle Bay. Barbadians are exceedingly proud of Run Barbados and a throng of spectators, both local and visitors to the island, always watch along the way and eagerly await the finishers at the Esplanade.

The 10km follows a similar route to that when it was first run in 1983 and known as the “Bridgetown 10K” and the 5km, Half and Marathon courses all wind their way along the streets of Bridgetown, a historic seaport which is part of a UNESCO World Heritage Site. Iconic landmarks, many dating back to the 1800s, abound in the capital including the Chamberlain Bridge, the Parliament Buildings, the statue of Admiral Lord Nelson, the distinctively beautiful St Mary’s Church and the “Mutual Building”, a tall Victorian structure with silver domes.

The Saturday afternoon runners in the 5km and 10km enjoy the hustle and bustle of Bridgetown as they encounter coconut vendors and “snowcone carts”, run by the local “Cheapside Market” (first opened in 1810) and along “Broad Street” the main street of the capital city.

The Sunday morning half and marathon have a “cool” start at 05.00 so as to avoid higher temperatures later in the day. These races allow runners to enjoy both the cityscape as well as the scenic coastal roads where spectacular vistas of the Caribbean Sea can be enjoyed from various vantage points. As the sun rises local churchgoers dressed in their Sunday finery call out words of encouragement as the marathoners pass by.

Two more recent additions to the Run Barbados schedule are the Friday Night Fun Mile and the Sunday morning 5km Charity Walk. Run Barbados has supported many charitable causes over the years and to this end is currently partnered with the Heart & Stroke Foundation of Barbados. Both the Fun Mile and the 5km Walk circle the historic Garrison and the Walk also travels along the beaches of Needhams Point.

In 2017 Barbados is celebrating a “Year of Sport” which will culminate on the first weekend in December with the 35th edition of Run Barbados. Several 2016 winners have already indicated that they will return to defend their titles.