Events in South Africa and Zimbabwe 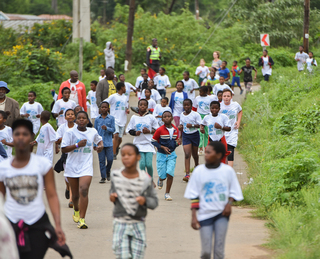 The final AIMS Children’s Series race to be held in Pietermaritzburg, KwaZulu-Natal was staged on 13 November from the FNB Wadley Stadium in Edendale, a township in the city of Pietermaritzburg. The race coincided with the 10th Greater Edendale 10km road race and both were organised by the Comrades Marathon Association as part of its Corporate Social Investment Initiative.

Close to 2000 children between the ages of 9 to 15 from schools around the township took part. They ran proudly for 5km along the streets of Edendale and for many it was their first experience of a road race and for nearly all it was the first time that they had received a t-shirt and a medal for doing so. As they finished the race they were applauded by the runners who had run the 10km and many community members who came to support the event. Well after the race kids from the township could still be seen wearing their AIMS CHILDREN SERIES t-shirts with pride and with their medals hanging around their necks.
The Comrades Marathon Association handed two electronic prizes to the two schools that brought the greatest number of school kids to participate in the event. The school kids also had an opportunity to win individual lucky draw prizes.

On behalf of all the children, the Comrades Marathon would like to thank AIMS for the noble idea of the AIMS Children’s Series race. Events like this go a long way in motivating kids to take up the sport of athletics. It is from these grass root events that future champions grow.

The final AIMS Children’s Series event to be held in Zimbabwe took place on 17 September at Riversdale School in Featherstone. School staff assisted the organisers from the Women’s International Fellowship (WIF).

Last year’s event raised sufficient funds to cover the installation of a borehole which has significantly improved the quality of drinking water and given the school a much more established feel to it.

All the children who participated received T-shirts and medals and winners were given trophies. A locally-recruited sponsor, NetOne (a telecommunications operator) gave the senior school runners pens as gifts.

Overwhelming demand required T-shirts to be given to all children participating in the events of the day, including the choir, culture club and catering.

For the senior school races were split between boys and girls but some of the primary school races were mixed. The longer races had to be held promptly to avoid the heat of the day. Races ranged in length from 100m for under-9s to 3km and 7km for over-14 girls and boys respectively. In all nine separate races were held. In between the races the children provided entertainment through the well-rehearsed choir, the Drama Club, cultural dances and poetry recital (which included hip-hop). Activities were rounded off with a tug of war.

The race has become the key event on the school calendar, with proceedings funding building renovations and additions. The races have inspired the development of sport in the school. They have introduced more sports into their curriculum and currently play handball, netball and soccer with cricket and rugby likely to follow.

The event was dedicated to WIF founder and visionary Jane Aichi Olamikun Banjo who fell ill during the 2015 races and eventually died in October 2015. The races were a fitting tribute to her legacy.

Events in the 2017 series will be held in Khanivali (IND) and Quito (ECU) during June and in Erbil (IRQ) in October.