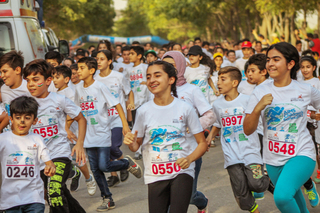 The second AIMS Children’s Series race of 2017 was held on 27 July in the city of Erbil, the capital of the Kurdistan region of Iraq, approximately 350km north of Baghdad.

This is the first time the AIMS Children’s Series has ever hosted an event in Iraq. More than 900 children, boys and girls, participated in the 2km fun run.

The event was staged by The Erbil Marathon organisation for Sport and Peace. The race took place in Samai Abdulrahman Park, the largest and one of the most beautiful parks in Iraq.

Many officials and consular representatives attended including the Governor of Erbil, Nawzad Hadi Mawlood. In his speech at the closing ceremony, he gave deepfelt thanks to AIMS and the Erbil Marathon organisation for staging such an inclusive event. He stressed the importance of sport, and especially running, for children and pledged his full support for future events.

“Seeing the children’s happy and smiling faces, excited and motivated to take part was wonderful” said Abdulsattar Younus, race director of the Erbil Marathon. “Receiving their first ever medal made them and us very proud.”