The buzz among the 13,000 runners was contagious 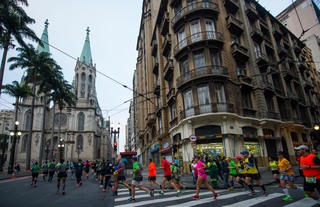 “When your legs get tired run with your heart”. This motivational quote perfectly describes Diogo Ferreira’s experience in his debut Marathon in São Paulo. His achievement was a lesson in overcoming adversity.

The 35-year old civil servant from Goias (a state in Brazil) started to run in 2015. “At that time I weighed 160kg and had high blood pressure, prediabetes, gallstones and sleep apnea caused by obesity,” he said. His doctor advised him to lose weight or he could suffer a heart attack or a stroke. “My wife was pregnant and I feared not seeing my son grow up. That’s why I decided to exercise and develop healthier habits.”

At the beginning it wasn’t easy or pleasant. He had backache and knee pain when he started running. “But as time went on, I was motivated by small victories.” After three years he had lost around 70kg and finished some 5km, 10km and even half marathon races. “I needed something to challenge myself again and I started to think whether a formerly obese person like me could run 42km. I slept many days on this idea until I decided to sign up for a marathon.”

He decided to start with the Sao Paulo City Marathon because he had heard it was well-organised. “I thought I wanted to run in the Brazilian ‘winter’ and the course had a great profile and passed by the most important sights of Brazil’s biggest city,” he said.

Diogo covered more than a thousand kilometres in his preparation and arrived at the start line feeling confident. The start is at Pacaembu Stadium – one of the temples of Brazilian soccer where all the most famous players (Pelé, Romário, Ronaldo, Neymar…) have played. “Conditions were good at the beginning of the race and the buzz among the 13,000 runners gathered there was contagious,” he said.

He ran easy to start, enjoying the course. “It was wonderful to run past the most important places in São Paulo, like the Municipal Theater, the old city centre, Sé Square and Ibirapuera Park.” But as the course climbed at Avenida 23 de Maio and through the Jânio Quadros tunnel many runners had their first nagging feelings of doubt. It wasn’t any different for Diogo: he struggled a little, but overcame these obstacles.

The biggest problem was when Diogo arrived at University of São Paulo at around 30km. “At this point things got monotonous. I realised that running a marathon is not only a physical challenge but also mental,” he said. At 34km he felt an unbearable cramp in his calf. “The contractions made my foot turn by itself and I started to trip on it.”

He stopped running and fell to the ground. He had to sit on the pavement and wait for the pain to disappear. “Many runners tried to assist me: they offered me water, energy gels and helped me to stretch my leg. One of them even sprayed some medicine on my calf to relieve the pain.” But nothing seemed to work.

The race medical staff showed quickly and called an ambulance to take Diogo to the aid station. “Then I got desperate. I knew that if I got into the car it would be the end of my marathon. I thought: nothing is going to stop me.”

Diogo had a flashback through everything he had been through to get as far as he had. The struggle for a new lifestyle and the pride his family and friends had in him made him press on. “They were cheering for me. I couldn’t let them down. I convinced myself that the pain would go away.” He found the strength to stand up and started to walk slowly, limping a little. “I knew that each step was getting me closer to the finish line and to the fulfilment of my dream.”

He walked from 34km to 38km and every time he tried to run he tripped. But he didn’t stop. After a while his legs got stronger and he could jog. “It was as if I’d had an injection of energy and from that point on I was sure that I would finish the marathon. The pained expression on my face turned into a smile.”

The last part of the race was pure emotion. “I decided to dedicate each of the last kilometres to the special people of my life; to honor them and to distract myself”. He thought of his family, his wife and his unborn child – those responsible for him changing his life. “For the last kilometre I reflected about everything I had done.”

When Diogo arrived at the finish line at the Jockey Club of São Paulo he was overwhelmed by an emotional avalanche: he smiled, shouted, ran and cried all at the same time. “I said to myself many times ‘I did it; I didn’t give up – I did it!’ I was overjoyed to have made my dream come true – dream that will certainly change my life.” After dedication, sweat, suffering, overcoming adversity and 5:36:36 of running, a new marathon runner was born: one with a strong heart.