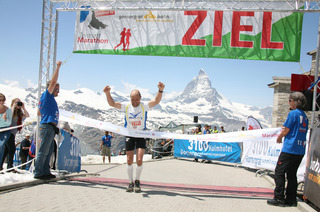 The Gornergrat Zermatt Marathon is the supreme alpine racing challenge. It starts in the village of St. Niklaus, which nestles in the lowest-lying mountain valley in Switzerland, and ends on Riffelberg by Gornergrat, the highest-altitude finish line in Europe (2585m).

When runners in the Gornergrat Zermatt Marathon pass the chapel on the Riffelberg and have the finish within reach, those in the ‘ultra’ still have exactly 3.4km to run and 514m to climb. The view from the Gornergrat at 3089m is unique and will compensate for all the effort.

On the first Saturday of July the starting shot for the Gornergrat Zermatt Marathon rings out at precisely at 08.30. The runners embark on a route that takes them far away from noise and stress. For the first 21km the race follows the valley floor mainly along the left bank of the Vispa River. Passing through lush green meadows and wonderfully scented pine forests the senses become animated. Combined with the fresh morning air runners feel a sensation of ease despite their efforts.

A special train of the Matterhorn Gotthard railway runs parallel to the race and acts as ‘terraces on the move’. Supporters are able to experience the running atmosphere and cheer the runners loudly from up close. We guarantee you’ll have a blast with the great atmosphere during the first kilometre.

After about 8km the valley becomes slightly wider and the ridge of Randa is visible from a distance. For the first time the route is noticeably ascending: sweat beads on the runners’ foreheads will remain their inseparable companions from now to the finish.

We continue through the rustic villages of Randa and Täsch. The relief/emergency stations, operated by the local associations, are at your disposal to attend to needs and spirits.

Zermatt is the peak of alpine resort sophistication with a breathtaking view of the world’s most beautiful and famous mountain: the Matterhorn. The route passes along the Bahnhofstrasse in the centre of the cosmopolitan town bringing runners back into the realm of civilisation one last time before they again compete with the forces of nature on their ascent to Sunnegga.

In Zermatt 800 half-marathon runners set off at 10.15 and mingle with the marathon and ultra runners who have already run 21km. Running along the Bahnhofstrasse, supported by hundreds of spectators, is a unique experience. A great atmosphere captivates all present and heightens the anticipation of the coming 21 kilometres.

After Zermatt, at the last aid station in the village, runners’ energies can be recharged as the ascent begins in the direction of Sunnegga through Arven forest and alpine meadows. The view of the breath-taking Alpine panorama rewards you and compensates for your huge effort. After about 32km the terrain flattens out for a few kilometres. As you pass by the refreshing mountain lakes Grindjisee and Grünsee you may be tempted to dive into the cold waters but the sound of the alpenhorn can already be heard and motivates you to continue.

The view of the magnificent Matterhorn gives you strength for the hardest part to come: the arduous ascent from Riffelalp (2222m) up to Riffelberg or up to the Gornergrat. This last lap scales an ascent of another 400m or 900m.

Riffelberg or Gornergrat – the pain is forgotten. Breathing becomes easier again. Swiss flags show the way over the last 500m. All around you lie 29 4000m-plus mountains all waving and applauding as you break through the finishing tape – because everyone is a winner here.

The finish area is an emotional place and the atmosphere is spreading. Runners proudly receive their medal, their finisher’s T-shirt and their bags which have been carried for them from the foot of Riffelberg. Every runner can shower at around 2500m – a valued luxury after the hardships of the race. Runners say that shower makes you feel newborn. Contrary to road marathons the legs are certainly tired but hardly anything hurts and the next day there is no muscle soreness – mountain running is kind on the body.

Runners are transferred back to Zermatt on the Gornergrat Bahn, an electrical cogwheel railway. The mountain panorama can be admired once again during the 40-minute ride. Retracing their footsteps like this each runner becomes even more aware of the great performance they have achieved on the mountain.

The Gornergrat Zermatt Marathon is not just about running, it is a special kind of experience. Thanks to the main sponsors, the Matterhorn Gotthardbahn and the Gornergrat Bahn: runners can better appreciate the area with free travel on the two railways’ networks from Friday to Sunday and also with the Sunnegga Express and the Postauto between St. Niklaus and Grächen. It’s a big plus considering that a return ticket from Zermatt to the Gornergrat costs 94 CHF.

Geneva, Zürich and Milano Malpensa airports are all about 3 hours from Zermatt. From Brig/Visp your registration confirmation entitles you to free travel to St. Niklaus. If you come by car there is free parking in St. Niklaus during the running weekend.

The 17th Gornergrat Zermatt Marathon will be on 7 July 2018. Marathon, Ultra and Half Marathon are all capped at 800 entries each and registration opened on 10 August. See: www.zermattmarathon.ch