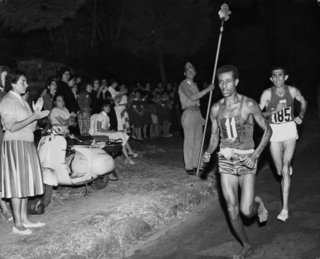 Abebe Bikila of Ethiopia, running barefoot, draws away from Abdesselem Rhadi of Morocco near the finish of the marathon at the 1960 Rome Olympics. He went on to win with a new Olympic record time of 2 hours 15 minutes 16 seconds. (Photo by Central Press/Getty Images)
Photo: Central Press
© This content is subject to copyright.

There are few images of Marathon runners that have attained a lasting place in history.

Among them are Spiridon Louis’ inaugural victory of the modern Olympic era in 1896, Dorando Pietri being assisted towards the finish line in the 1908 London Olympics, Jim Peters valiantly but unsuccessfully striving towards the finish line at the 1954 Empire Games in Vancouver. And then there is the barefoot Abebe Bikila padding his way along the torchlit Appian Way on his way towards victory in the 1960 Rome Olympics.

The Marathon had started in the late afternoon to avoid the worst of the midsummer heat. The unknown Bikila led the Moroccan runner Rhadi Ben Adbesselem as they passed between rows of soldiers holding flaming torches on either side of the ancient Roman thoroughfare. Bikila slowly but inexorably pulled ahead to cross the finish line at the Arch of Constantine in a new world record time of 2:15:16. It was the first time a black African had won the Olympic Marathon and set a course for many others to follow in his footsteps.

Bikila was born on 7 August 1932 – the same day that the Los Angeles Olympic Marathon was run – in the village of Jato, about 120km north-east of Addis Ababa. His father was a shepherd and the young Bikila tended the flock and studied in a local school until he was 12 years old.

In 1951 he moved to Addis Ababa and joined the Imperial Guard. It is reported that he ran 20km from the hills of Sululta to Addis Ababa and back every day during much of the mid-1950s. The Imperial guard were trained by a Swedish coach named Onni Niksanen who spotted Bikila’s talent and trained him for the marathon. He finished second in the 1956 Ethiopian Military Championships and began what his coach called a “long planned operation” to compete in the 1960 Olympic Games.

He won his first marathon in July 1960 in Addis Ababa at an altitude of 2600m. One month later he won another. He was selected with one other marathon runner to go to Rome. When he got there he bought running shoes but found them uncomfortable and elected to run barefoot.

He returned to a hero’s welcome in Ethiopia. A victory parade through streets packed with well-wishers ended with his presentation to Emperor Haile Selassie, who awarded him the Star of Ethiopia and promoted him to corporal. The Guard provided him with a house, a car and a chauffeur. Only weeks later the Imperial Guard mounted an abortive coup against the Emperor, who was out of the country at the time. Bikila was not directly involved but was arrested and questioned.

He competed abroad occasionally, winning the Athens Classic Marathon, the Mainichi Osaka Marathon and the Kosice Peace Marathon in 1961. In 1963 he suffered his only overseas loss when he finished fifth in the 1963 BAA Boston Marathon, Back in Ethiopia he won the Armed Forces Championship and the Olympic Trials. Six weeks before the 1964 Olympic Games, held in Tokyo that year, he felt sudden pain while training which was diagnosed as appendicitis. He had his appendix removed on 16 September but was out of hospital within a week.

Five weeks later in Tokyo he started the race cautiously – this time wearing Puma shoes – and remained at the back of the leading group. But by 15km only Ron Clarke (AUS) and Jim Hogan (IRL) were still with him. At 20km he eased away to eventually finish four minutes clear in a new world record time of 2:12:11. It was the first time anyone had successfully defended their title in the Olympic Marathon.

Back home again he was promoted to lieutenant, received the prestigious Order of Menelik II and was gifted a Volkswagen Beetle and a house. He continued to compete in marathons overseas but in July 1967 he suffered a hamstring injury and dropped out of a marathon in Spain. It proved persistent but there was further trouble in his build-up to the 1968 Olympic Games in Mexico City. Only one week before, when he was already in Mexico City with the Ethiopian team, a pain in his left leg turned out to be a stress fracture. He could do no more training before lining up for the event and he dropped out at 16km. His compatriot Mamo Wolde won gold.

On the night of 22 March 1969 Bikila lost control of his Volkswagen Beetle. It overturned, trapping him inside. He was freed from the car next morning and taken to the Imperial Guard hospital. He became paralysed below the neck and never walked again. He was transferred to Stoke Mandeville Hospital in Britain and was treated there for eight months and regained the use of his arms.

In 1970 he started training for wheelchair archery and competed that year at the Stoke Mandeville Wheelchair Games in both archery and table tennis competitions. These Games were the precursor to the modern Paralympic Games.

Bikila died aged 41 on 25 October 1973 of a brain hemorrhage related to his accident four years before. He received a state funeral attended by 65,000 people and Emperor Haile Selassie declared a national day of mourning. Many buildings have been named after him, including the national stadium in Addis Ababa.

In 2010 the Rome Marathon marked the 50th anniversary of his Olympic victory by offering a bonus to the winners if they crossed the finish line barefoot. With the victory sealed Ethiopia’s Siraj Gena ran the last 300m shoeless: “It was a very special feeling,” he said. “Abebe Bikila inspired me today.” Firewok Dado, also Ethiopian, won the women’s race by three seconds: “Abebe Bikila was a big inspiration for me but I did not think about taking off my shoes,” she said, “my priority was to win the race.”