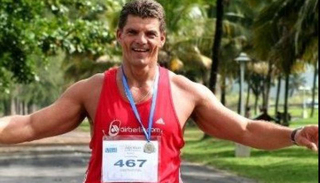 In 1998 Wolfgang Slawisch was working for the Beachcomber group of hotels at Grande Baie in Mauritius _writes Hugh Jones._ He had taken responsibility to set up the ‘Beachcomber Mauritius Marathon’. I was invited to measure it but such was Wolfgang’s boundless enthusiasm that he quickly convinced me to run it as well.

I returned the following year but after that Beachcomber withdrew their support and the marathon was discontinued. Wolfgang returned to Germany but had been bitten by the Marathon bug. For a while he worked with Munich Marathon and was always a lively presence at the Berlin Marathon expo.

After another false start in 2004 Mauritius Marathon finally got back on its feet in 2010. Wolfgang was back in the fray. He was a man of strong loyalties. His attachment to Mauritius during his time there was continued through personal sponsorship of a child at the SOS village as well as ensuring that the Village became an official charity partner of the Marathon.

After so much time spent promoting Wolfgang ran the 2011 edition – and of course wrote about it afterwards in glowing terms: “As the road continues to climb and descend one runner after another overtakes me. Most offer a smile and a cheer, ensuring my resolve to finish. I stop at a roadside shop to buy an ice cold drink. It stops raining, the sun breaks through the clouds and my mood brightens. Waves thunder against the distant reef, while surfers ride them closer to the shore, and the sight of the beach lures me on.

“One more ascent and the village of St. Felix appears. Soon I can hear shouts and cheers from the finish line along with Mauritian Sega music. A beautiful Mauritian woman gives me my medal, I can enjoy drinks and refreshments, but I head straight for the turquoise waters of the Indian Ocean.”

Wolfgang also picked up a connection with the Reggae Marathon in Jamaica to promote the two similar but non-competing events.

“It was all very informal then. He visited us in Negril twice and after many conversations we formalized our relationship. He went to many race events in Europe supported by the Jamaica Tourist Board. A lot of our European participants have come because they met Wolfgang at some Expo or another in Europe. Wolfgang introduced Reggae Marathon to Europe, Mauritius, India and other countries. He was relentless in his promotions and travels and it was a pleasure to work along with him and share in his exciting journey across the world. He loved nothing better than to be able to meet with top international runners and share his vision with them. We felt his pain when he was side-lined by various injuries and could not run; he was very passionate about the sport.”